Why Dunn the Sun is the epitome of perseverance | AFLW

Hannah Dunn is the epitome of perseverance.

The 28-year-old was overlooked in three NAB AFL Women’s Drafts and moved states twice in the past 12 months to chase her football dream.

Incredibly, the Canberra native has played an AFLW game, though, and a historic one at that.

She was part of Greater Western Sydney’s first ever contest in 2017, being elevated from the Giants’ ‘train-on’ squad to debut against Adelaide.

It would be her only game for the club before being delisted.

Now, two years on, after persisting with her beloved Queanbeyan Tigers and then playing a season with Norwood in the SANFL, Dunn was snapped up by fledgling Gold Coast with pick No.22 in October’s draft.

She now gets a second chance of sorts to get the “full AFLW experience”.

“After being knocked back three times in the draft, it’s not that I lost hope, but I’m getting older and I thought there was only so long I could keep chasing this, especially when all these 18-year-olds are such jets,” Dunn told womens.afl.

Moving to Adelaide was a risk – she’d never lived away from Canberra – but it would be an experience she could look back on fondly regardless of the outcome.

Dunn was no stranger to travel, though.

Once the Giants elevated her from the train-on squad in 2017, the midfielder made a six-hour round trip to attend one training session a week.

She wouldn’t return home until 1am, and then have to front her full-time government job a few hours later.

“It’s a lot to sacrifice when you’re not actually on the team.

“I did it once a week once I played that game and then it fizzled out with work. It took its toll.”

That won’t be a problem any more.

After succeeding with Norwood, she has now moved for a second time, to Miami on the Gold Coast to play with the Suns.

“Being able to be a part of a brand new club, I’m just excited to see,” she said.

“People from the outside will probably think that being a new club that we’ll struggle, but I’m ready to prove them wrong.

“Come round one, a few of us have a point to prove.” 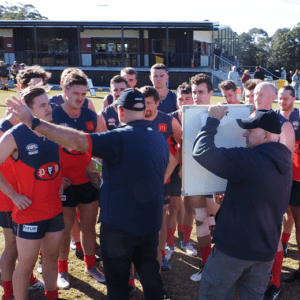