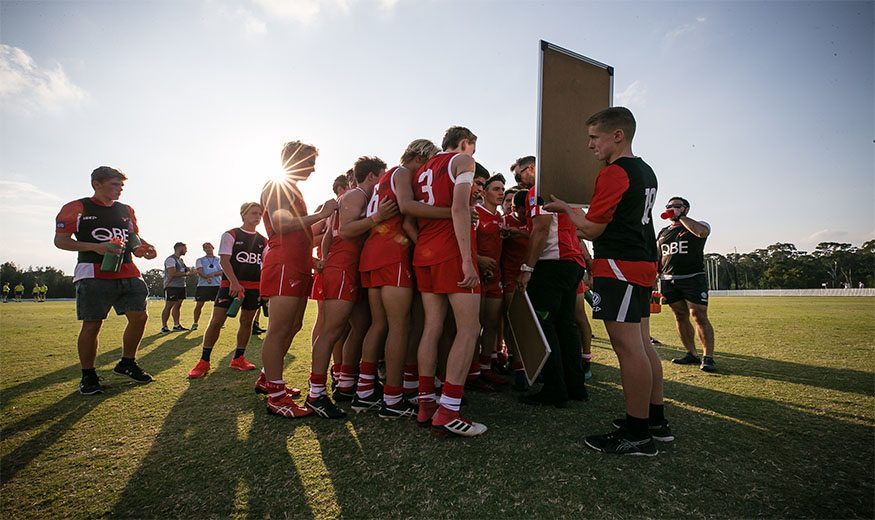 The NAB AFL Under 16 Academy Series came to an end over the weekend with the Sydney Swans Academy finishing one game ahead of the GIANTS Academy in the three-match Series.

Scores remained fairly close to half-time with the Swans holding only a seven-point lead going into the main-break.

Oscar Davis from the Mosman Swans led with the boot, finishing with three goals for the Swans, while another eight individual goal scorers kept the score ticking over.

Westbrook’s Braeden Campbell and Errol Gulden from Maroubra were also named in the Swans’ best.

Coolamon’s Godfrey Okerenyang and Coleambally’s Jack Cullen were standouts for the GIANTS Academy, kicking two apiece and keeping them in the game for most of the match.

The AFL NSW/ACT Under 16s squad will soon be released ahead of the upcoming NAB AFL Under 16 Championships.

The Under 17s Futures Academies played out their first and only match of the year on Saturday, with the Sydney Swans Academy running away with victory.

Inflicting a painful afternoon on the GIANTS Academy, the Swans had seven goal scorers, including Tommy Baxter from the UNSW Eastern Suburbs Bulldogs, who slotted four six-pointers.

While the GIANTS kept in touch until the half-time break – only down by 26 points – the Swans were able to put their foot on the pedal and charged home to win by 73 points.

The AFL NSW/ACT Under 17s squad will be announced in the coming weeks ahead of the 2018 NAB AFL Under 17s Futures series beginning in June.