There have been many famous Australian Football names come from the nation’s capital. Bolton, Bruce, Steele, and Jesaulenko – just to name a few.

At a local level the Powell moniker has made a name for itself, but as Jack Powell prepares for the 2017 NAB AFL Draft Combine, he hopes to add another name to this impressive list of Canberrans to make the big time.

Recently, Powell played in the AFL Canberra First Grade Grand Final between his junior club, Belconnen and his current club, Ainslie. Alongside his big brother, Thomas, Powell and the Tricolours brought home the F.J. Dorman Trophy – a feat he describes as ‘special’.

“It was exciting. It [playing together] didn’t happen very often when we were younger,” says Powell.

“It was really great to play with him this year and win a premiership. I was very happy with that, as was he, and the family.”

Winning Premierships is not something new to this midfielder. Over his short career, the 18-year-old has played in several Grand Finals – including the breakthrough GWS GIANTS NEAFL victory in 2016.

“I’ve won about four or five Premierships. I think I’ve been in one every year since Under 12s or something like that. I have been very fortunate.”

Growing up in Canberra has allowed Powell to approach his footy with a more laidback style, but with the growing presence of the GIANTS in the capital city, he has noticed a marked increase in interest around the game.

“More people are getting involved. As a second sport even. They might be playing something else but they’ll play that sport on the Saturday, and then play footy on the Sunday.

“I would definitely say there are a lot more people involved and a lot more volunteers as well.”

A poster boy for AFL NSW/ACT’s Talent Pathway, Powell began playing AFL as a junior and joined the GWS GIANTS Academy at age 13. He played for the NSW/ACT Rams as a 16-year-old, and following a starring role in the blue and gold, was selected for the National NAB AFL Academy.

Powell has played for both the GIANTS and Canberra Demons in the NEAFL, played every Allies game in 2017and is now preparing for the 2017 NAB AFL Draft Combine this October.

AFL NSW/ACT State Manager of Talent and Coaching, Darren Denneman says the Draft Combine is the next step in what has been an impressive career so far.

“Jack, as an AFL and GIANTS Academy member, has good credentials heading into the Draft,” says Denneman.

“He is a small inside midfielder who can navigate his way through traffic. He is a good ball user by both hand and foot. and has an aggressive mindset at the contest. He is also a good overhead mark for his size.”

It has been a busy few years for the Draft hopeful, but Powell is not one to knock back an opportunity.

Naming his NAB AFL Academy Coaches as his biggest influences, Powell says he is grateful for the knowledge they have been able provide – a chance to learn that he has grabbed with both hands.

“The AFL Academy Coaches – they are great. We take so much from what they say. They have so much knowledge and experience, and know what they’re talking about. We take it all in.

“They prepare us to be the best we can be, and it shows in most of the players. It’s a really good program to be in.”

Preparing to be the best he can be is exactly what Powell is spending his off-season doing. With the Draft Combine mere weeks away, he has taken on extra training in search of his AFL dream.

“I am currently seeing a speed coach. It’s all about technique and it gets you an extra second or millisecond faster, it’s pretty amazing what they do. They have a lot of knowledge.

“I’ve been doing that for the last two weeks with another two weeks to go. There have been improvements and I know I can get faster.”

Powell has also sought the advice of a nutritionist to accompany his physical improvements. Cutting out sugars and many carbohydrates, Powell has upped his protein intake, which assists with his muscle growth and recovery.

This approach to his game is complimentary of Darren Denneman’s description of Powell’s playing and personal style.

“Jack is a quiet, no nonsense type who goes about his business,” says Denneman.

As with years before, Powell has also relied on his Talent coaches to help him through this period.

“They plan it out and I just follow it, and do it. It’s great to have them plan gym and running sessions – it helps so much.

“They also help with recovery, that’s probably one of the most important things that they show you. Us players work really closely with the staff, and strength and conditioning coaches, it’s great.”

Another area of expertise Powell says the AFL NSW/ACT Talent team have passed down to he and his teammates, is that of the love of the game. He says they have fostered his enjoyment of AFL and made sure that he never forgets why he is chasing his dream of becoming and elite AFL player.

“You can’t give up on your love of the game. If you do, then you’re done. You’ve got to keep the drive and focus on getting there.

“I feel like I’ve had that mentality throughout the whole program. Making the nationals team, it helps you want more, and helps you drive towards your dreams.

“And I am one hundred percent, ready for that.”

Jack Powell will join 82 players from around Australia at the 2017 NAB AFL Draft Combine on 3-6 October 2017 at Etihad Stadium in Melbourne. Stay tuned to the AFL NSW/ACT website and social media platforms to keep track of his progress throughout. 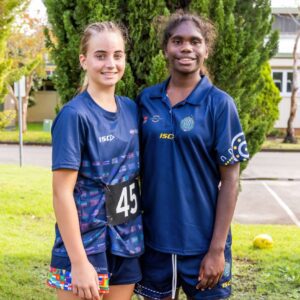