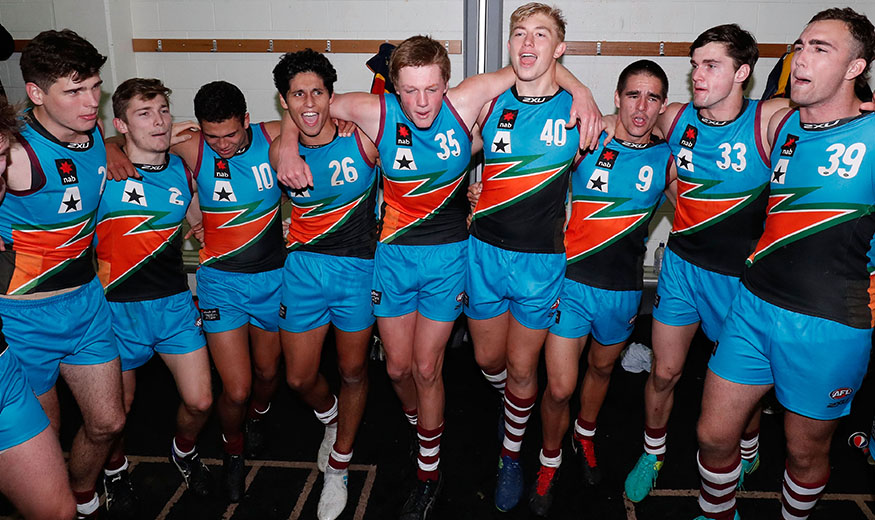 Nick Shipley (number 26) and Jarrod Brander (number 33) with their Allies teammates this year.

The squads have been announced for the upcoming NAB AFL All Stars matches being held in Melbourne next week.

An Under 18 All Stars game will showcase some of Australia’s top talent when they play against each other in a curtain raiser to the 2017 Toyota AFL Grand Final.

The best Under 17 talent from around the country will also feature in a Futures match on Friday, September 29 at Simonds Stadium in Geelong.

Two AFL NSW/ACT players have been named for the Under 18 All Stars game, and another has been named in the Under 17s Futures match.

GWS GIANTS Academy member, Nicholas Shipley has been named in ‘Team Enright’, while Wentworth’s Jarrod Brander has been named for ‘Team Harvey’. They will get the chance to play at the MCG on the biggest day of AFL of the year, running out onto the hallowed turf on Grand Final Day.

Both players have been invited to attend the NAB AFL Draft Combine next month, as they look to impress selectors ahead of this year’s draft.

Shipley is a ball-magnet, with the utility midfielder impressing in this year’s NAB AFL Under 18 Championships for the Allies. His speed was a huge asset coming through junior ranks, and his reputation has only grown in stature since his time with the GWS GIANTS Academy.

Likewise, Brander has turned heads. He is a utility player that can play as a key forward or defender, and many pundits have raised his name as a possible top ten pick in this year’s Draft.

For both players, this game will be their last chance to impress in-match before the Draft.

In the Under 17s match, AFL NSW/ACT will be represented by Pennant Hills’ James Peatling, the Murray Bushrangers’ Matt Walker and Ben Kelly. Peatling has been named to play in ‘Team Enright’, while the two Murray Bushrangers’ will play for ‘Team Harvey’.