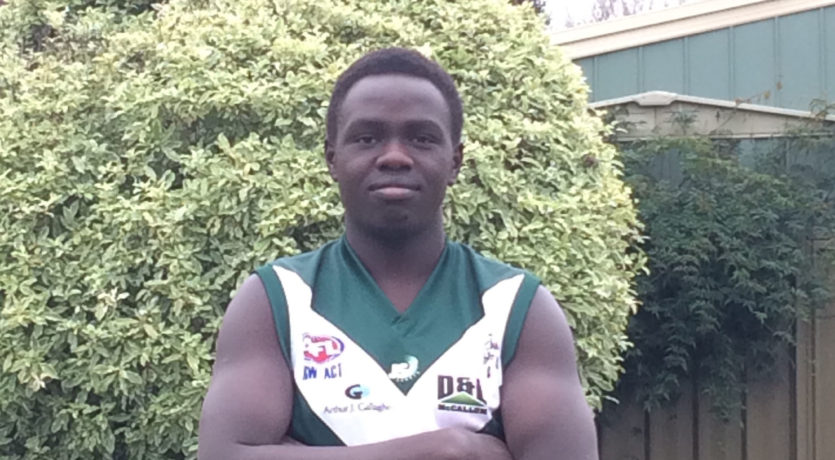 17 year old Benson Ochieng is making history at the Coolamon Football and Netball club. Ochieng is the first Sudanese player to play for the rural club.

Ochieng was born in Uganda after his family fled from war torn Sudan. Ochieng’s family lived in Sudan during the north and south civil war, Benson’s father, Philip says that their village was constantly attacked and they had no choice but to flee the country, “The war was over religion, Christianity verses Muslims. Every attack led to hundreds of deaths.”

Benson’s family was separated, his aunty and older sister went to Kenya and his parents to Uganda, “Most families, including mine were spilt up because of the war.”

Although Benson wasn’t born, his parents remind him about how life could have looked for Benson and his brothers and sisters, “Our parents tell us about the war and how the war moved from town to town. As soon as the war came to their town they had to pick up their lives and leave, leaving family and possessions behind.”

Both sides of the separated family thought the other didn’t survive, with no death records kept and thousands of deceased, the chance of the family ever reuniting were very small. However 10 years later both sides of the family were accepted to relocate to the regional city of Wagga Wagga.

Benson was only 8 years old when he moved to Australia, times were difficult – new country, new language and a sister he hadn’t met before, “Moving to Australia was very different. I didn’t speak a word of English and had to attend a Australian school, it was hard.”

Benson’s neighbour Paul encouraged him to play footy for the Wagga Swans “In Uganda they play soccer, so learning AFL was difficult to get my head around at first, but my neighbour Paul taught me the rules.”

After 2 years with Wagga Swans, Benson moved to the Coolamon Football Club, were he plays in the reserves team. His coach Matt Hard believes he is an asset to the club, “He has been playing some very good and consistent footy in the Under 17’s. He has been fantastic for the footy club, he is very popular amongst the playing group.”

“His family follow his footy quite closely and we love having them around the club, cheering Benson and Coolamon on.” Hard said.

Benson had his first grade debut just weeks ago, “Playing for the first grade side felt good, it was amazing to play with the older guys and learn from them.”

“I love playing with my mates. Coolamon is a great community based club, they really look out for all of us players.”

Benson is grateful to his first coaches, ‘Shaun Bradley and Dominic Norman from Wagga Swans were a real support for me, they were really good coaches and if I was struggling I knew I could go to them for help.”