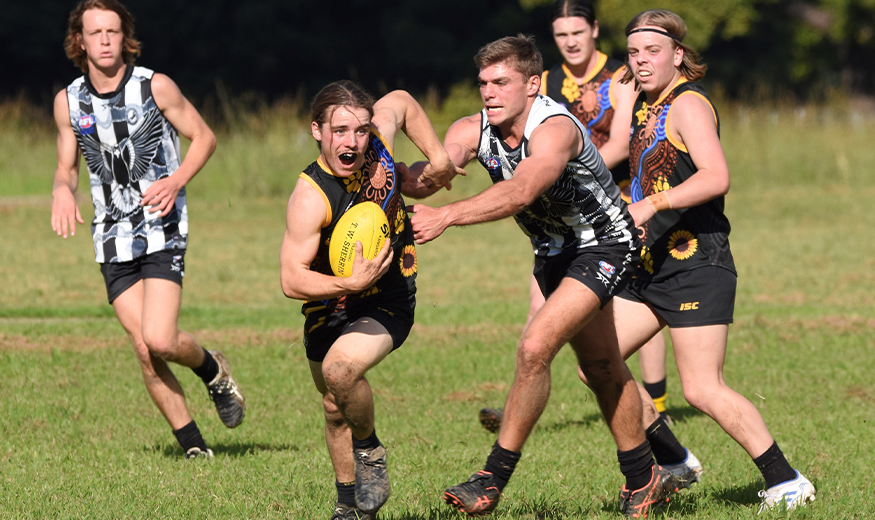 AFL North Coast is one of the most geographically spread out leagues in the state, with the northernmost club, Lismore, and the southernmost, Port Macquarie, about 350 kilometres apart.

Pre-seasons can take a lot of clubs to the limit physically and mentally. However, the three clubs in AFL North Coast had it harder than most have ever experienced, as torrential rains brought devastating floods with them on the eve of season 2022. Casino Lions, Lismore Swans and Bellingen Bulldogs juniors have all had a tough run.

Unfortunately, this meant Lismore Swans was unable to put teams on the park in Seniors this year. We look forward to their return whenever they’re ready.

A highlight of the season so far has been the inaugural Pride Round, across Rounds 10 and 11. Players from all Senior clubs wore rainbow socks and were joined by the umpires who wore rainbow sweatbands.

The league itself created a pride logo to show its support for LGBTIQ+ people in their community, with the intent to show all members of the community that local footy is a safe space where you can feel free to be yourself.

Ten rounds have been completed, although rain hampered the season’s start, and it’s a pretty open season, with all teams having at least one loss.

Consistent performers, Coffs Breakers, lead all comers and sit atop the table. However, the side’s run might not be as dominant as it appears, having being convincingly beaten in Round 8 by second placed Northern Beaches.

The sides have met twice, with the Breakers defeating the Blues by one point, after being outscored in the final term.

If these two meet in the grand final, it’ll be one for the ages and a repeat of the 2020 decider (the last one played), where the Breakers claimed the flag.

Grafton will be looking to notch its first win for the year in the backend of the season. Although suffering some heavy defeats, the team has kept improving and will be looking at Sawtell in Round 15 as its best chance at victory. Coffs Breakers and Northern Beaches are the leading contenders so far in the women’s competition. Photo: Brad Greenshields

In stark contrast to its women’s side, Grafton Tigers are yet to lose this season, but they’ve come out on top of several nail biters.

These narrow wins means the Tigers have a slender percentage, relative to being undefeated, of 143, shaded by the Coffs Breakers’ 247 percentage. The Breakers win big when they should, and scrap against their rivals.

Sawtell’s sole victory came against Port Macquarie. If the Saints come home with a wet sail, they may be a chance to play finals.

lAFLW Draft: Swans and GIANTS’ picks (and a Tiger!)
Women's Coaching Month is BACK in 2022r