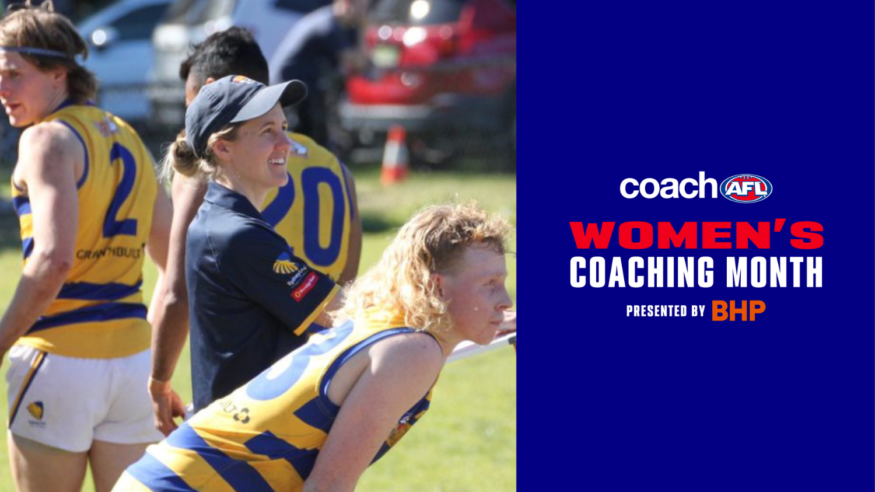 The AFL is proud to celebrate the second annual, Women’s Coaching Month, for the entire month of July, presented by BHP.

Women’s Coaching Month presents the opportunity to celebrate the contribution of current women in coaching across the country and promotes the pathway programs and initiatives to get more women coaching at community level, across state leagues and at the AFL and AFLW level.

The BHP and AFL partnership focuses on developing girls and women who want to play, coach, umpire and administer our game, and encourage the men and broader community to be advocates and allies in this space. The partnership is a holistic one that focuses on promoting leadership, inclusion, equality and wellbeing, recognizing that progression for women is what’s best for the community.

BHP’s strong ties to coaching is through the BHP Women’s Coaching Academy, which has seen 18 coaches graduate since 2019, and a further eight as part of the 2022 program. BHP is also the proud presenting partner of the National She Can Coach program alongside the Women’s Coaching Month.

AFL General Manager Women’s Football Nicole Livingstone said that recruiting more women into coaching roles is a key priority for all levels of the game.

“Women’s Coaching Month celebrates women already in coaching roles and provides an opportunity to further support and promote the pathway programs and initiatives to get more women who are passionate about our game into coaching,” Ms Livingstone said.

“This year marks our second annual Women’s Coaching Month and we’re proud to work alongside presenting partner BHP to further highlight the need for more female coaches from grassroots to the elite level.”

“We know there is work to be done in recruiting more women into coaching roles, but we’re excited that momentum is growing with a 100 per cent increase in women coaching across the NAB League since 2021. We’re absolutely committed to growing these numbers across all levels of the game.”

“Whether it be as a player, an umpire, in administrative roles, or in coaching, we are always seeking new ways to encourage women and girls to become involved in the game they love.”

Nine AFL Clubs have been awarded position in the Women’s Coach Acceleration Program where they will be employed for a minimum two-year period between now and 2025. The program involves a formal mentorship with a senior men’s AFL coach and a Level 3 Coaching Accreditation achieved as a minimum. The program is co-funded by the respective Club, together with the AFL, with relevant Soft Cap exemptions in place. Women’s Coach Acceleration Program recipients are:

In the rebel VFLW Competition, seven (7) of the twelve (12) Senior Coaches are women. They are:

There are also a number of women in Development Coaching roles across the NAB League.

The women coaching (across boys’ and girls’ programs) in the NAB League for 2022 are: