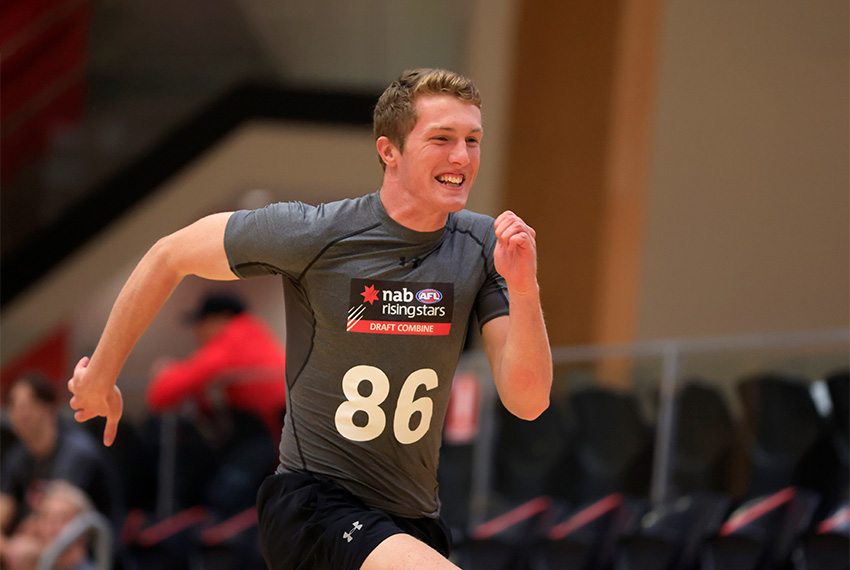 While the spotlight has been shined squarely on the likes of Braeden Campbell and Errol Gulden in preparation for the 2020 NAB AFL Draft, one player who has taken a backseat through all the commotion has been Canberra’s Josh Green.

The younger brother of GIANTS midfielder Tom, Josh will have the opportunity to follow in his brother’s footsteps in just under a week from now.

Born in Townsville, the Green family moved between Darwin, Melbourne, Toowoomba and Tamworth, due to their father Richard’s commitment with the military as a pilot, before finally relocating to Canberra in 2012.

“Joining the GIANTS Academy was fantastic, I think it is so helpful for kids like myself, and Josh, and people in Canberra who are interested in playing AFL football,” Tom said.

“In Canberra it’s primarily Rugby and Basketball so having an AFL development system is so important and it helped me develop a lot.

“I’m really grateful it was in place and something I could be a part of.”

Drafted with the 10th overall selection of the 2019 NAB AFL Draft, Tom enjoyed a spectacular first season in the AFL, making his debut in Round 1 and re-signing with the GIANTS until the end of 2023.

“Re-signing was really easy if I am honest, I had been around the club a lot longer than the other draftees, so I didn’t need a whole lot of time to understand the club or get to know the people.

“The GIANTS are a fantastic club and for me they are the closest team to home in Canberra, so it was honestly an easy decision.

“While we didn’t have the best year, I have no doubt that we’ll be returning to finals football in 2021.

“I want to be at a club with that winning mentality and the GIANTS offer that.”

Seeing his older brother trying to crack the big time from close range has inspired Josh to follow in Tom’s footsteps.

“I watched every game this year, critiquing him of course,” Josh laughed.

“But it motivates me because you see Tom succeeding in what he wants to do and it’s exactly what I’ve wanted to do as well, it’s something that’s helped drive me for sure.”

In what has been a difficult year for all draft hopefuls, Josh played most of his football in the AFL Canberra competition for Marist but was able to train alongside his brother during the lockdown period.

“No doubt this year was difficult at times,” said Josh.

“Obviously our pre-season lasted from November last year to mid 2020 so it was really long, but the coaches in Canberra kept us all together and we were allowed to still go train with another person so when Tom came back home we’d go do sessions together, which helped.”

In a reduced version of the Northern Academy Series between the GIANTS and Sydney Swans in August, Josh credits GIANTS Academy coach Cameron Bernasconi for allowing him to showcase his versatility across the ground.

“Being able to play midfield, forward and back is my strongest asset and speaking to a few clubs they’re like minded in that,” said Josh.

Josh attended the recent AFL Draft Combine in Sydney, one step closer to achieving his dream of running out onto GIANTS stadium alongside Tom.

“That’s the dream, obviously we don’t know what will happen in the draft but that’s always been my end goal.”

This season’s NAB AFL Draft will be held on virtually on Wednesday, December 9.

You can watch each pick live as it happens throughout the night on AFL.com.au, the AFL Live Official App and Fox Footy.