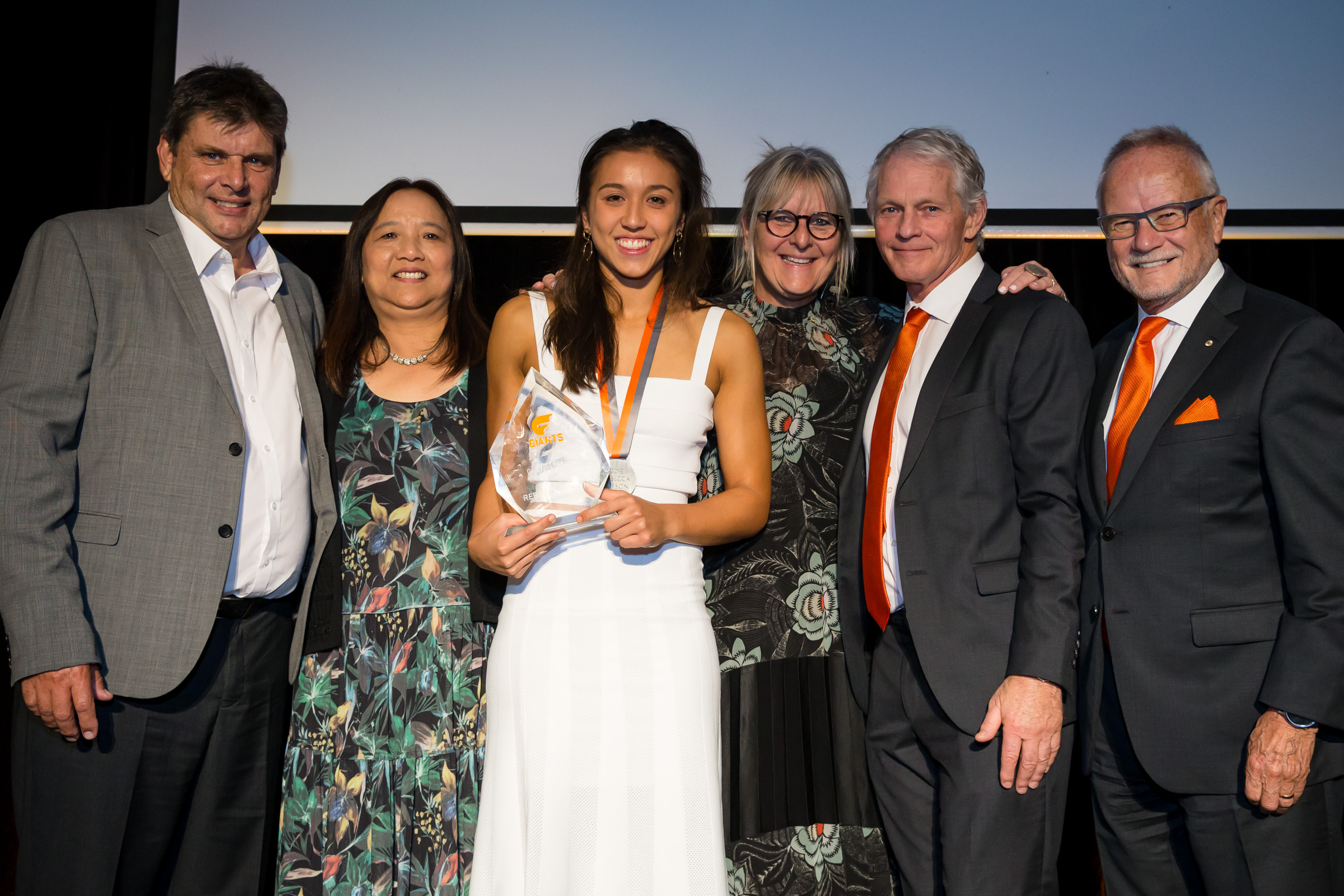 A crowd of 200 people at Rosehill Gardens in Western Sydney witnessed the closest count to date, with Beeson finishing just two votes ahead of 2018 winner Alicia Eva and Irish import Cora Staunton.

Beeson led the count from start to finish but faced strong competition from Eva and Staunton late in the count, with the club champion only confirmed during the final round of the season.

Beeson’s win is all the more impressive after the New South Wales product moved into a midfield role, having played primarily as a forward during her first two seasons in the competition.

The 22-year-old adapted to the new role averaging 16.3 disposals at 72 per cent disposal efficiency, 3.1 tackles and two marks per game in 2019, and was named in the 2019 Virgin Australia AFLW All Australian 40-player squad.

“Bec’s had a fabulous season transitioning from playing almost predominantly half forward last year into the midfield this year,” he said.

“She was given multiple roles throughout the year, playing as an inside midfielder, on the wing and sometimes at half forward. Her ability to use the ball well was pivotal in a number of our games.

“Cora played higher this year than she did last year and got more of the ball, and for her to finish equal-runner up when she is still learning the game shows how great an athlete she is.

“Alicia had a quieter start to the season but came home with a storm and as always she was a significant part of our playing group as a leader both on and off the field.”

McConnell, along with his three Assistant Coaches, vote on the Gabrielle Trainor Medal with up to four votes able to be awarded to a player by each coach every round, with each player able to receive a maximum of 16 votes per round.

Defender Emma Swanson received the Coaches Award, while forward Christina Bernardi won both the Leading Goal Kicker and Mark of the Year.

Yvonne Bonner became the second successive Irishwoman to claim the Goal of the Year award following Staunton’s win in 2018 and rounded out a successful first year in her new code by finishing 9th in the Medal count.

GIANTS Chairman Tony Shepherd paid tribute to the Head Coach Alan McConnell, the playing group and retiring midfielder Courtney Gum after a tough season that saw the GIANTS finish third in Conference B.

“Under the watchful eye of Alan McConnell, I have no doubt that this group is capable of going a long way next season,” Shepherd said.

“Alan – your passion and commitment to this group is second to none and we are very grateful for how you guide this group and represent the club so well.

“All of our players deserve recognition for the way they have carried themselves this season, although I want to particularly acknowledge Courtney Gum, who has obviously announced her retirement after two wonderful seasons at the club.”

The Gabrielle Trainor Medal is named after former GIANTS board member and current AFL Commissioner Gabrielle Trainor, who was on hand to present the award, to recognise her contribution to the club and women’s football in NSW.

Ms Trainor was an inaugural GIANTS board member as well as a member of the Team GWS advisory committee before joining the AFL Commission in 2016.

Prior to joining the GIANTS, Ms Trainor also served on the AFL NSW/ACT Commission for 10 years. She worked to support the then-fledgling Sydney Women’s AFL in its development and its relationship with the Commission.

Beeson is the third player to be awarded the Gabrielle Trainor Medal, following Alicia Eva in 2018 and Jess Dal Pos in 2017.

2019 Mark of the Year, presented by Opstar – Christina Bernardi, Round 1 v Brisbane

2019 Goal of the Year, presented by Westfund – Yvonne Bonner, Round 3 v Carlton