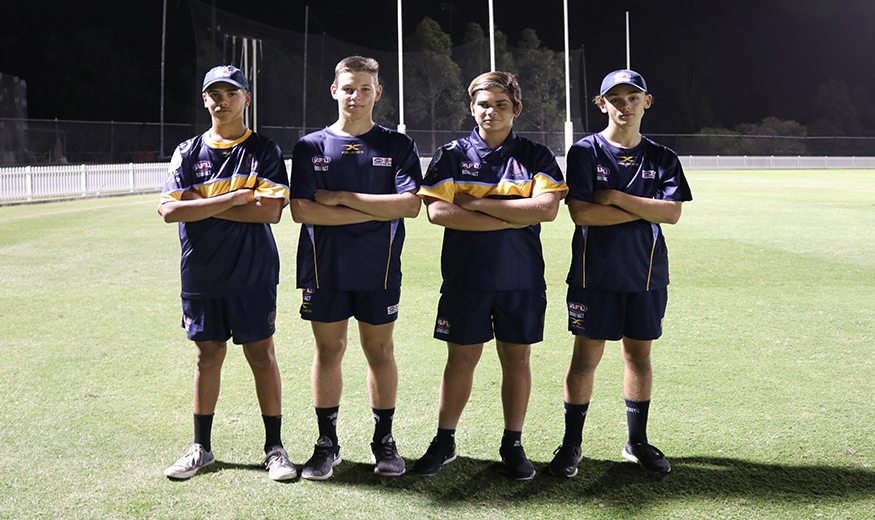 It was an unlucky Monday for both the AFL NSW/ACT Kickstart and All Nations squads on Day Two of the 2018 AFL National Diversity Championships in Sydney.

Queensland took revenge for yesterday’s defeat by the AFL NSW/ACT Kickstart squad, outlasting the All Nations side by seven points in their first match of the day.

Unfortunately for the multicultural side, their day did not get much better when they took on Victoria. Against a team that currently sits second on the All Nations ladder after only losing one match, the home side were over-roared by a side stocked with Academy based players from south of the border.

All Nations Coach, Amandeep Singh said he was pleased with his side’s effort, despite the losses.

“The boys kept the intensity high for their games today and didn’t let down on the effort,” said Singh.

“The work ethic and sportsmanship that was on display made me proud as a coach.”

Singh was also quick to laud the efforts of Thomas Sase, Harry Wichman and Omar Matar for their day two games, saying that they are making their mark on the competition.

In the end, our All Nations squad went down by 47 points in a brave effort.

See all the Day Two All Nations scores from AFL NSW/ACT and all the states and territories here.

After beating Queensland and pushing the Victorians yesterday, the AFL NSW/ACT Kickstart side struggled in Western Sydney’s heat on Day Two.

Coming up against ladder leaders, South Australia in the first match of the day, the Kickstart side could not capitalise on the opportunities presented. Against a team, which included the son of 300 game legend, Gavin Wanganeen, AFL NSW/ACT struggled to halt their fast style of play. Going down by 48 points, the boys were disappointed by their loss.

For the second match of the day, the Kickstart side continued to struggle against a fast finishing Tasmanian outfit. Going down by 63 points, this signaled the end of the Kickstart team’s day, heading home to rest before another big day of competition tomorrow.

See all the Day Two Kickstart scores from AFL NSW/ACT and all the states and territories here.

Today everynone of the teams were treated to a performance by AFL NSW/ACT Ambassador and Western Sydney hip-hop artist, L-Fresh the Lion during their daily education session.

In the education session, players from all states and territories discussed the impact of racism and how to be resilient in the face of it. Link-Up New South Wales also spoke to the group about connecting the stolen generation back to their families and culture.

L-Fresh the Lion and AFL NSW/ACT Kickstart player, Braithen Kemble also combined for a freestyle rap with Kemble adding the backing track for L-Fresh on the didgeridoo.