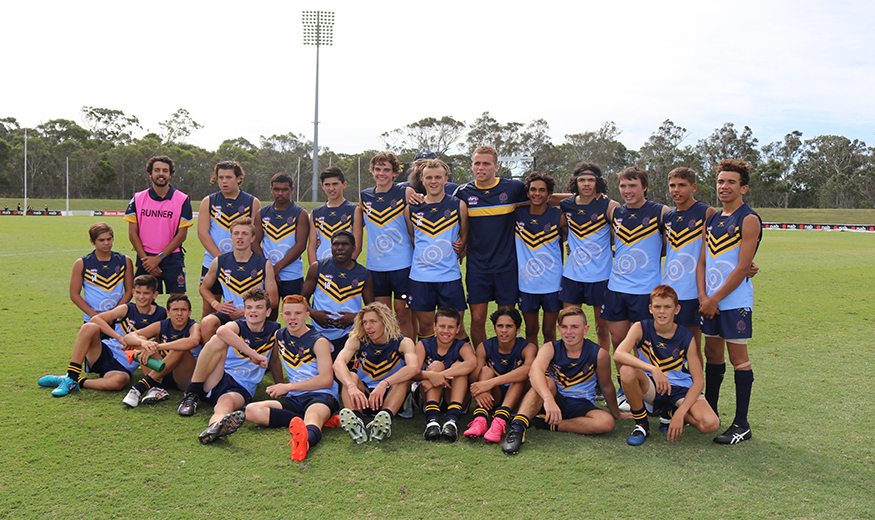 Tyron Edwards pushed his team with two goals, while Kai Watts was a standout for the home-side, not only kicking two goals but dominating his opponents across the ground. Trevon Bob and Hunter McAuliffe were also impressive.

In the Kickstart side’s second match of the Championships, they pushed Victoria to the siren. Leading for much of the game, AFL NSW/ACT gave Victoria a massive scare, only allowing them in front in the final two minutes.

Edwards was again a leader for the locals, kicking two goals alongside Kynan Kilpatrick and Lachlan Saunders, who both shot one each.  McAuliffe backed up his opening match performance, catching the eyes of onlookers once more, while Bryce Monoghan was similarly impressive.

AFL NSW/ACT Kickstart Coach, Gerrit ‘Chief’ Wanganeen said he was pleased with how his Kickstart side began the tournament.

“I am really proud of the boys’ performance today,” said Wanganeen.

“Knocking-off arch rivals Queensland was great and coming so close to Victoria – while disappointing that we lost – demonstrated how well the boys have prepared for the Championships.”

See all the Day One Kickstart scores from AFL NSW/ACT and all the states and territories here.

It was a case of so close, yet so far for the AFL NSW/ACT All Nations side on Day One of the 2018 AFL National Diversity Championships in Western Sydney.

While defeated by Tasmania in their opening match by 23 points, the All Nations squad fought back in their second hit-out of the tournament against South Australia.

In front of a loud and proud home crowd, the locals pushed their more-fancied opponent until the dying seconds. Ahead for the majority of the match, it was the likes of Omar Matar down back and Raajan Singh in front of goal who kept AFL NSW/ACT in the hunt.

Ably supported by Jordan Endemann and Tomas Sase through the middle, a disappointed but determined AFL NSW/ACT All Nations side went down by just two points.

See all the Day One All Nations scores from AFL NSW/ACT and all the states and territories here.