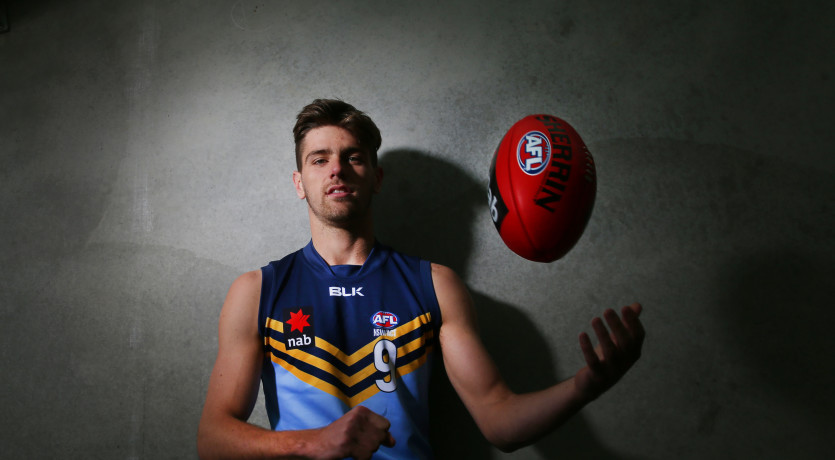 Jock Cornell of NSW/ACT poses during the 2015 AFL Under 18 portrait session at Simonds Stadium, Geelong on June 27, 2015. (Photo by Michael Dodge/AFL Media)

The 187cm medium forward/midfielder possesses an elite kick and reads the game extremely well, averaging thirteen possessions and two goals a game over the NAB AFL Under-18 Championships.

He backed up his consistent on-field displays with a good showing at the National Combine, though it was physically and mentally taxing.

“Yeah it’s just very busy, there’s a lot of sitting down time but there’s also a lot of testing, a lot of interviews, a lot of places to be at certain times so it’s probably all just getting that down and being where you need to be on time,” Cornell said.

Cornell had a very demanding 2015 season, kicking off the year with an insight into the life of a professional footballer, spending a week training with the GWS Giants.

“Our local clubs wouldn’t have even started training yet so if it wasn’t for the GIANTS Academy training that we did for about six weeks before Christmas, who knows where I would be at the moment, probably a lot further behind these boys,” – Jock Cornell.

The Riverina local started the year strongly, picking up the UWS Giants’ first NEAFL Rising Star nomination of the season after his five-goal haul against Eastlake in round one. He managed seven NEAFL games with the Giants this year, played TAC cup with the NSW/ACT Rams and competed in the national championships.

“It’s been an exciting year it’s good to be all over and done with now and leave it up to the 24th of November.”

Cornell moved to Wagga in 2011 and as a PM Capital GIANTS Academy member GWS have priority access to him if they see him as a draftable player. Cornell credits his development and improvement as a footballer down to the professional academy system.

“To play alongside some big names they have in there a lot of classy players it was just an unreal experience.” Cornell is the son of Julie Cornell, who is one of seven sisters to the Daniher brothers Terry, Neale, Chris and Anthony, and he’s grateful for the influence of Uncle Chris, who coached a young Cornell growing up in Ungarie.

No doubt the entire extended family will be fixed on November’s Draft, hoping Cornell can join cousin Joe Daniher on an AFL list.