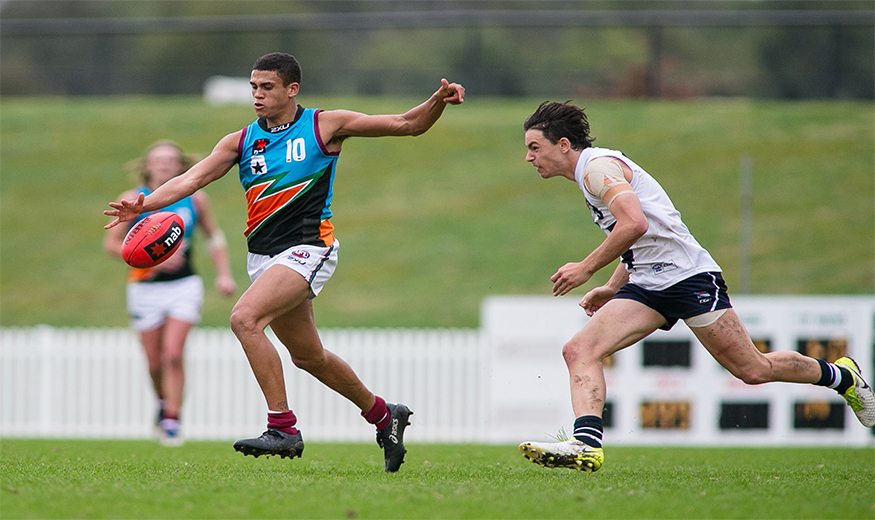 The Sydney Swans could not wait to call Jake Brown and James Bells’ names at the Rookie Draft, both pre-selected as Category B Rookies prior to the 5pm commencement.

Hailing from Coffs Harbour, Jake Brown was an inaugural member of the QBE Sydney Swans Academy. In 2016, Brown was overlooked in the AFL Draft, but earned his opportunity after impressing with the Swans’ Under 19 NEAFL Development Squad, where he picked up a NEAFL Rising Star nomination in Round 17. He becomes the first player from the North Coast to be drafted into the AFL

Bell joined the QBE Sydney Swans Academy from the Illawarra region, and has been a state player for the NSW/ACT Rams and Allies squad for the past few years.

Both players were part of the undefeated Sydney Swans Academy Under 18s squad at the 2017 NAB AFL Under 18 Championships.

Another local product, Jack Buckley’s signing at the GWS GIANTS was also announced prior to the Rookie Draft. Much like Brown and Bell at the Swans, Buckley was also selected as a Category B Rookie by the GIANTS.

Doulton Langlands was the final player to be selected in the Rookie Draft, chosen by St Kilda in the first round of the event.

Hailing from Albury and playing for the famous Murray Bushrangers, Langlands impressed the Saints at the 2017 NAB AFL State Combine back in October.

The end of the 2017 NAB AFL Draft period marks another successful year for AFL talent from New South Wales.

AFL NSW/ACT State Manager of Talent and Coaching, Darren Denneman says he is pleased to see so many homegrown players selected by AFL clubs.

“AFL NSWACT is delighted with its 2017 Draft result,” said Denneman.

“We look forward to watching this group of players make their mark at the elite level.”

AFL NSW/ACT wishes to congratulate all players drafted onto AFL lists for 2018.