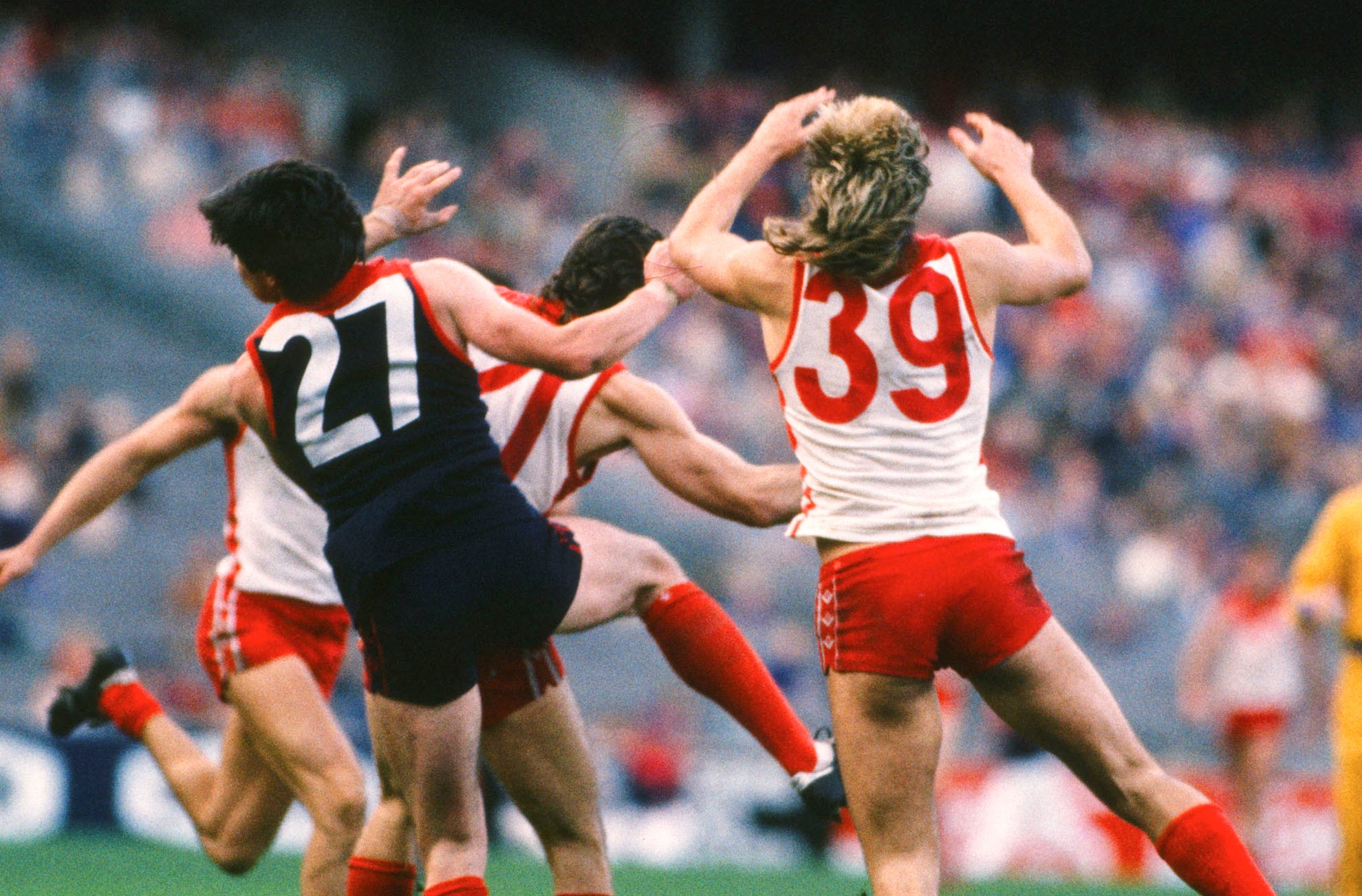 Like a shooting star Warwick Capper flew across the Sydney skyline in the 1980s grabbing screamers by the dozen and the attention of the Harbour City like no Aussie Rules player had done before.

Three decades on and the Wiz is still one of the most recognised sports people in the country and his impact on the success of the AFL in Sydney still lingers.

In the early years of AFL expansion he was the one who cracked the Rugby League strongholds of Sydney and Brisbane.

He also set the blueprint for the Swans commercial success in the toughest sporting market in the country. Before Lance Franklin, Barry Hall and Tony Lockett there was Capper.

Nowadays he’s remembered mostly for his flamboyance, the pink helicopter and the red corvette, the blonde hair and tight shorts, and even his 1985 single ‘I only take what’s mine’. But his footy ability and achievements rarely come to mind.

Over the decades his public persona has become a smoke screen to a seriously underrated football career.

In his 124 games (90-Swans, 34-Brisbane) he kicked 388 goals at an average of 3.13 per game. Modern football is a different game but Capper’s return compares very favourably with our current heroes. Lance Franklin is averaging 3.15 from his 300 games, Jack Riewoldt is running at 2.41 and Josh Kennedy at 2.51.

For players who have played a minimum of 100 games Capper’s average of 3.13 ranks 24th in the history of the game.

At his pinnacle in 1986 and 1987 he kicked 195 goals across the two seasons, bringing up the ton (103-1987) in the qualifying final against Hawthorn and taking the mark of the year over Chris Langford. It was one of a host of nominations over his career but this one was immortalised in Jamie Cooper’s painting ‘The game that made Australia’ commissioned by the AFL to celebrate the 150 year anniversary in 2008.

He averaged 4.48 goals in 1987 and finished runner up in the Coleman Medal to Tony Lockett. The year before he finished second behind Brian Taylor (100 goals) with 92 goals.

Capper is now 57 and living in Melbourne, he looks back on his heady days in Sydney with fondness and a sense of humour.

“I used to take five of those (Langford) marks a week,” Capper said. “I had that many cars I had to open a car yard.”

The mark over Chris Langford is Capper’s most famous grab but when it comes to ranking his best Warwick places the mark above the Hawthorn champion third.

“I’ve taken better marks,” Capper said. “The one over (Michael) Passmore against North Melbourne that was better. The best was when I went about 30 feet over Darren Flanagan in 1984 but there was no TV coverage. It was a double lift, he jumped when I jumped. My dad reckons that was my best.”

Capper’s rise to stardom started out in the eastern suburbs of Melbourne playing at Oakleigh District, the same junior club as Swans team mates David Rhys-Jones and Stevie Wright.

Wright knows Capper better than most and even put him up for six weeks when the star forward returned to Sydney from the Brisbane in 1991. It turned out to be an experience he never forgot.

“He rang me and said the big boy’s coming back to Sydney,” Wright said. “Next thing you know he was at my front door and he stayed for almost two months. He was worse than my kids who were five and seven. I’d come home from work and there’d be cereal bowls in the lounge room and mess everywhere. He would blame the kids.”

While Wright was happy to get the Wiz out of his house he loved playing alongside him again after his three years at the Brisbane Bears.

“The guys at the Swans understood him,” Wright said. “He was different and nobody took offence at that and he was very personable and great fun to be around. He didn’t really fit in at the Bears and the big ground at Cararra didn’t suit him. The SCG was better for him because it was one kick out of the square and Warwick could jump and contest.”

Capper’s return to the Swans in 1991 would last just one season. At the age of just 28 his career was over but his six seasons in red and white had left an indelible mark on footy in Sydney.

Another of Capper’s team mate’s at the Swans, David Murphy has continued to live in Sydney since his retirement in 1993 and says the star forward has left a lasting legacy.

“Warwick is one of the most recognisable sports people in Australia to this day,” Murphy said.

“Everyone knows who Warwick Capper is. He cracked Sydney and Queensland, he cracked the Rugby League dominated market and it’s stuck. He showed the AFL the way to grab attention in Sydney, this town loves key forwards and Warwick led the way for Buddy, Plugger and Barry Hall.”

Looking back on Capper’s career it’s hard to believe he only played 90 games in red and white, it feels like it more.

“The game’s been good to me,” Capper said. “I can’t complain. I retired from work at 30. My dad said today’s news is tomorrow’s fish and chip paper, so get on with it.”