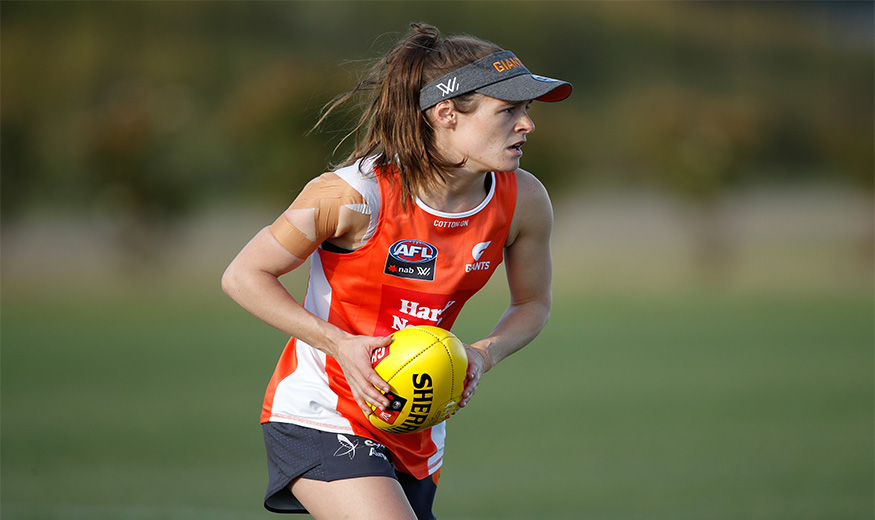 The AFL NSW/ACT Rams state squads will have some star power behind them in 2018 with new coaches at the helm of the Under 16s, Allies and AFL Women’s Under 18s squads.

Alicia Eva, one of the star 2018 GWS GIANTS AFLW recruits, will take the reigns of the AFL NSW/ACT Youth Girls squad with her GIANTS teammate, Nicola Barr coming in as Assistant Coach.

Joining the GIANTS this year from Collingwood, Eva placed second in her former club’s Best and Fairest, after a stellar year as their inaugural Vice Captain. Originally from the reputable Melbourne University VFLW club, where her teammates included the likes of Brisbane’s Kaitlyn Ashmore and the Bullldogs’ Emma Kearney, Eva comes to the AFL NSW/ACT coaching panel with an already established coaching reputation.

Eva began her coaching career when she turned 18-years-old and was unable to continue playing footy, before the AFL Women’s senior competitions were formed. Unwilling to give up her footy passions, she took over from her dad as Coach at her junior club. Since then, Eva has collected a long list of coaching credentials ranging from local level to state.

As a former Captain of the Victoria Metro Youth Girls side, Eva was asked to stay on as coach and her resume grew from there. Since then, she has coached various boys teams at the famous Victorian club, the Calder Cannons, become an AFL National Youth Girls Academy Coach (touring New Zealand twice as Assistant and then Head Coach), led the inaugural Victorian Kickstart (Indigenous) Youth Girls side, and this season coached the Calder Cannons TAC Cup Girls to an inaugural TAC Cup Premiership.

Having held the first AFL NSW/ACT Youth Girls talent camp for next year’s group this past weekend, Eva says she was excited to see the footage of AFL NSW/ACT players she had previously watched on screen, come to life.

“Camp One with the girls was a really good experience for myself to get an understanding of who the girls are, and where they are at in terms of their football development,” explains Eva.

“The immediate focus is to continue to develop the squads fundamental skills first, to be able to further develop their Footy IQ.”

Having come from arguably the best and most established AFL talent program in the country (Victoria), Eva’s assessment of the talent coming through the New South Wales and ACT region is realistic and well-assessed, considering the travel constraints the AFL NSW/ACT teams have.

“First of all, I have a whole new appreciation for the effort these girls and their families put in to helping them improve and hopefully reach their goals. Some of the players had traveled eight hours in a car to get to the Blacktown camp – coming all the way from Broken Hill. This was not something we saw when coaching at Vic Metro.

“Due to the distance some of these players travel, it means we are unable to work with the girls on a weekly basis like I have in other programs, so a lot of the program relies on girls taking away what they have learnt in camp, regularly using communication channels that have been set up for them to view vision, coaching tips et cetera, and being really proactive in their own skill development.

“One area of notable difference from the programs I’ve been involved in back in Victoria is the skill discrepancy across the group. Presently, the top end girls in this squad execute skills really well, and read the game really well. However, there is a larger discrepancy from ‘Player A’ to ‘Player Z’ than in the Victorian programs – again this is where my new appreciation for the travel comes into it.

“A big focus for the coaching group is to help fast-track the skills of the girls new to the game and the squad. We have already seen some great work done by Tim Schmidt in this space.

“The really encouraging thing for me as a coach is that these girls have already shown they are highly committed to help drive their own development when away from the squad. “

Nicola Barr has also come on board Team AFL NSW/ACT ahead of the 2018 NAB AFLW Under 18 Championships. A former AFL NSW/ACT Ram herself, Barr has been watching talent coming out of New South Wales and the ACT for some years.

“The talent coming through the ranks is certainly exciting,” says Barr.

“Coming through the system myself, and now having a coaches perspective, I can see the growth in both depth and talent, which has developed over the past few years.

“With the introduction of AFLW, it means these girls can aspire to playing elite football, and this will ensure that the depth of talent in New South Wales and the ACT continues to grow.

“Both Alicia and I are really excited about the talent of the girls coming through this year, and are looking forward to helping them develop as elite footballers on and off the field.”

Former Sydney Swan, Lloyd Perris has also been confirmed as the AFL NSW/ACT State Academy Coach, set to lead the Rams Under 16s squad in 2018, and joining the Allies as Assistant Coach in next year’s NAB AFL Under 18 Championships.

As a former AFL NSW/ACT Ram from Under 16s to Under 18s, and a former AFL Academy member, Perris knows and understands the local AFL talent landscape, and will look to develop the many players coming through with dreams of making the big time.