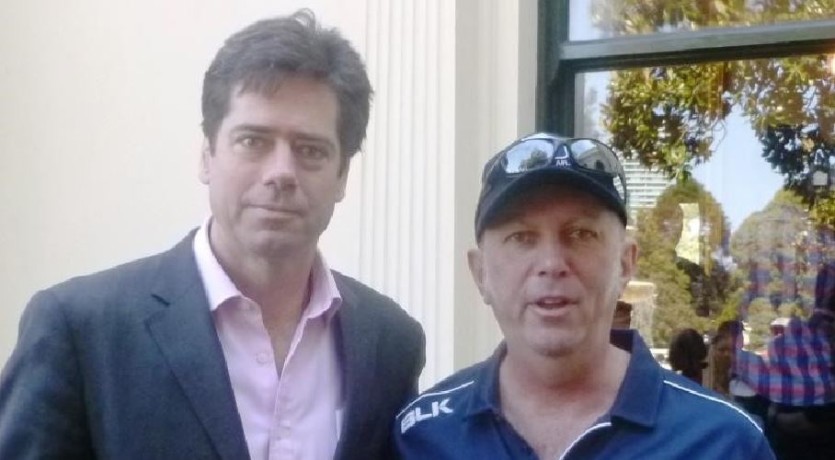 A constant figure around the Saints since his son Ethan began Auskick in 2005, Byrne held various coaching and administrative positions before taking on the role of Club President in 2012.

“There is nothing like the way St. Ives develops and treats their kids. The way the club is run was amazing.”

“He is there for the right reasons and has had a big influence on making the club a great environment.

“He’s very inclusive and makes sure the volunteers are looked after. He’s the heart and soul of the football club.”

After 10 years the man himself said his motivation for club involvement was ‘creating the best experience’ possible to develop outstanding young men.

“I don’t want to put a timeframe on it but it’s spread to multiple organs. They’ve taken the tumour out of the bowel but there is also problems with the liver, stomach, and abdomen.”

Despite obvious difficulties the 50-year-old Byrne continued to have an active involvement at his beloved Saints, taking up a position as a Coaching Coordinator in 2015.

As a reward for his tireless efforts at St. Ives, Byrne, along with other state Volunteer of the Year winners, were treated to an unforgettable AFL Grand Final experience, including tickets, flights and accommodation for two as well as the chance to march in the Grand Final parade.

Having never been to a Grand Final Byrne said he was ‘elated’ to take his wife to Melbourne for the weekend.

Byrne discussed his experience at the AFL Grand Final, along with a raft of other thoughts, on his regular blog, Trev’s Journey.

“I write a blog. I’m extremely open about it. I try to help people dealing with diseases, what to say and how to speak to people with serious illness.”

On his blog Byrne details his treatment and health updates as well as thoughts on footy and family.

“I started the blog to express what I have in my head. It’s also an easy way to keep people updated. People genuinely want to know how I am going.”

In a situation where many would be downtrodden Byrne’s attitude and enthusiasm are an inspiration to his local football community.

“Each day is a real gift, another day I get to spend with my lovely family. I no longer have a bucket list as I know I don’t have the time, every experience I have is something I want to share with my family.”