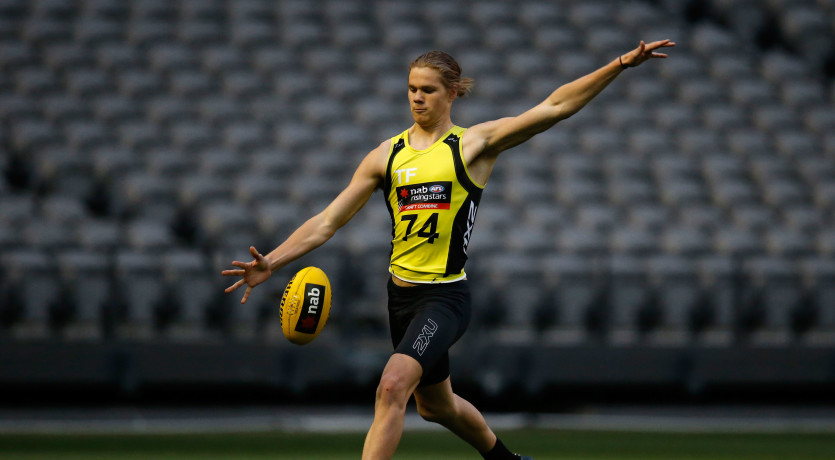 After an impressive end to the season Eastlake forward Harrison Himmelberg appears ready to take his second chance at gaining a spot on an AFL list.

The 19-year-old, who missed out on being drafted after an injury-plagued 2014, recently enhanced his prospects by turning in a best-on-ground performance at the MCG in the Grand Final curtain-raiser.

“I was really excited to play on the ‘G’”, said Himmelberg.

“It was only my second time being out there. It was really good to get that last game in and play good and have a win.”

The 192cm key-forward used his agility and speed to deliver an eye-catching display as the Allies defeated the NAB AFL Academy.

“I watch players like Jeremy Cameron and Cam McCarthy. I play a bit like them, kind of that lead up mark taking forward.”

Himmelberg recently attended the National Draft Combine in Melbourne as around 80 of the country’s best young footballers were put through their paces in front of AFL recruiters.

“I would’ve liked to do a bit better in some of the tests but overall it’s been a pretty good weekend.

“Just with the club interviews and stuff like that it really keeps you on your feet mentally as well so it’s been pretty full on.”

Originally from Wagga, Himmelberg played with Mangoplah CUE before making the move to Canberra to play for Eastlake in the NEAFL.

As a member of the PM Capital GIANTS Academy Himmelberg was also able to play four NEAFL games with UWS in 2015.

“It’s really good with little aspects of your footy like your structures and stuff like that,” Himmelberg said.

“Playing with blokes like Cam McCarthy and Jon Patton, it’s really good just to have them around. They give you tips all the time and pointers and let you know how to go about it.”

Himmelberg will learn whether he has done enough to earn a spot on an AFL list at the National Draft in Adelaide on November 24.

“There’s a good mix of nerves and hopefulness. I’m pretty excited for the next couple of months.”