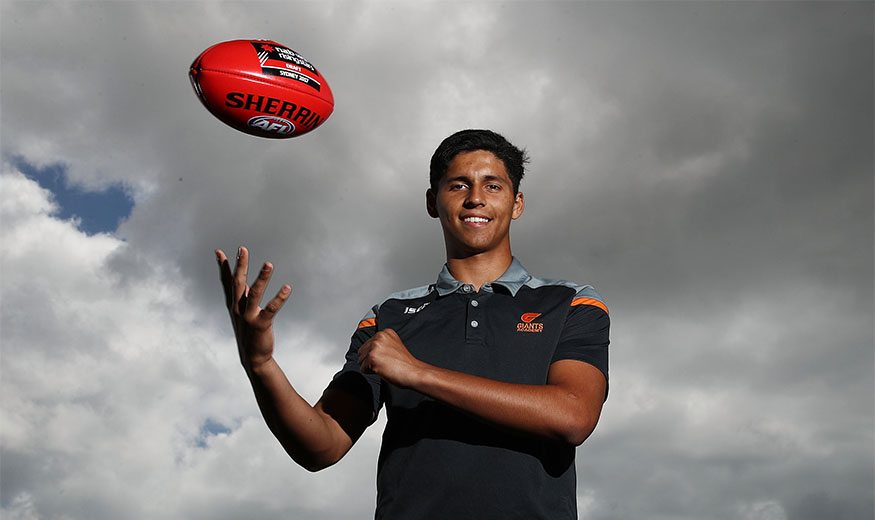 When Nick Shipley steps out on to Spotless Stadium on Saturday afternoon, his debut carries extra significance.

The 85th GIANT becomes the first GIANTS Academy graduate from Western Sydney to play for the club.

Shipley’s debut is a landmark occasion for the GIANTS, with the agile midfielder having joined the GIANTS Academy in 2013, one year after the club entered the AFL.

“It (Shipley’s debut) probably exemplifies one of the reasons why the club was put in, to grow the game in Western Sydney,” GIANTS Coach Leon Cameron said.

While AFL players have previously hailed from Western Sydney, Shipley is the first of his generation – a kid from Campbelltown introduced to AFL by the League’s newest club.

Shipley’s journey to the highest level hasn’t been an easy one. It’s been one of hard work and learning.

The now 18-year-old didn’t truly pick up the game full time until he was 15, leaving behind his first sporting love of soccer.

“He had played some school footy and one carnival of ours as a 13 or 14-year-old but he was mainly a soccer boy,” GIANTS Academy Head Coach Jason Saddington recalls.

“Then at the back end of his 15s year we were really keen to get Nick involved, bring him back into the Academy so we made a targeted effort to bring him in for our pre-season training.”

From that point on Shipley was hooked but, as Saddington explains, he wasn’t a naturally gifted footballer.

“He did need to learn a lot about footy and running patterns and work on his skills and understand the game but because of his coachability he got himself through,” Saddington said.

“Nick was a naturally driven athlete and he was always willing to learn so any bits of new information that came to him, he was able to absorb and put in place.

“He always had a million questions every two minutes about how did I go with that? Was that right? Was that good? So, he had that ability to want to learn and be super coachable so that allowed him to pick it up.”

Such was Shipley’s desire to improve as a footballer that at one stage he tried too hard, arriving at Academy training with sore quads having overdone his kicking practice.

“If you said, ‘Nick you need to practice your kicking and become a better kick’ he would go home and kick the footy for hours on end,” Saddington said with a laugh.

“That’s what he was like, if you said he needed to get fitter he’d go and run three kilometres every night, so we had to be careful in a way as to how much we gave him as we knew he’d go overboard and break himself.”

Cameron echoed Saddington’s sentiments, with the GIANTS’ main man impressed by Shipley’s willingness to learn since being drafted as an Academy Selection with pick 64 of the 2017 NAB AFL Draft.

“For him to fast track his development and to be playing in round six of his first year is quite extraordinary,” he said.

“He’s a good, diligent kid, he works hard, and he’ll give everything he’s got in terms of effort.

“He’s not going to leave anything in the tank on Saturday and we look forward to seeing how he plays.”

Shipley surprised some fans and pundits with impressive performances in his two JLT Community Series outings earlier this year, averaging 15.5 disposals, while his form in the NEAFL also warranted the call up.

“He was someone that was still learning the game, so I think that’s something that was surprising, that he could have somewhat of an impact,” Saddington said.

“From his natural abilities you knew he’d be strong over the footy and he’d be able to be strong in the contest which is what holds him in good stead.”

Shipley’s impact won’t just be felt on field this weekend with his debut providing inspiration for young footballers across Western Sydney.

“He sets a massive example that if you want to work hard you can certainly give yourself an opportunity,” Saddington said.

“He shows that if you are from Western Sydney and you don’t know much about footy, and you don’t have the background in AFL but you’re a good athlete and you’re prepared to work hard that there are opportunities to find yourself on the list at the GIANTS.”