AFL’s Multicultural Round launches in Sydney 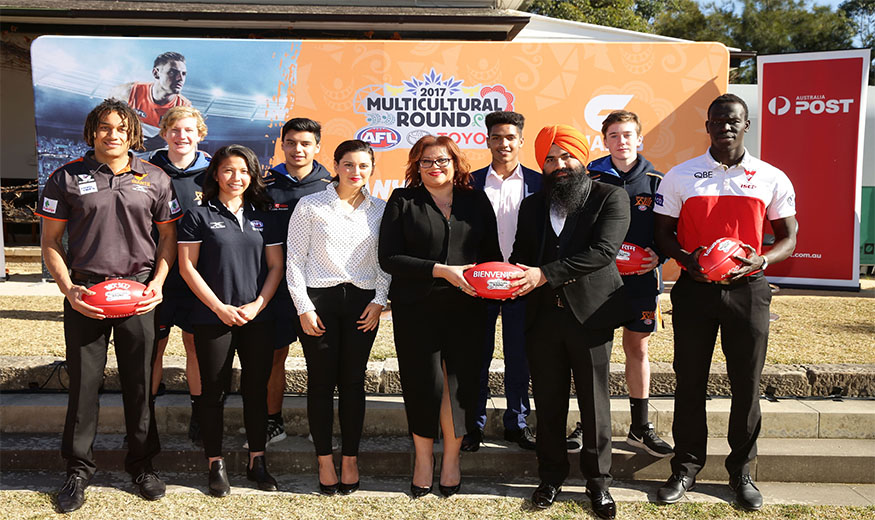 The AFL launched the 2017 Toyota AFL Multicultural Round at Lachlan’s Old Government House in Parramatta this morning.

Ms Hosch explained that the round was an important reminder to AFL fans and the wider Australian community about embracing cultural diversity within our migrant nation.

“We see more than ever that the community level and grassroots football is starting to reflect the cultural diversity within our country, and the work we do through our Multicultural Programs – with our community inclusion partner Australia Post – needs to be credited,” Ms Hosch said.

“Whilst it will take time, we are firm in our commitment to have the elite game being truly representative of the cultural landscape of Australia.

“The Next Generation Academies are a tangible approach of this commitment and will no doubt provide further opportunity and success to players of all backgrounds in the years to come.

“Our iconic game provides a harmonious and safe platform for all to feel included in Australian society and to have various cultures and linguistics celebrated,” she said.

Western Sydney hip-hop artist, L-Fresh the Lion dazzled attendees by performing two songs, including his hit ‘One’ to open the morning.

Master of Ceremonies, Azmeena Hussain joined keynote speaker, Jamila Rizvi who spoke to the crowd of over 100 people about her family’s journey to Australia from India, telling her audience that ‘the future of the game is a Multicultural one.’

The NSW Government is a supporter of the 2017 AFL Multicultural Festival as presented by Australia Post, which will be held during the 2017 Toyota AFL Multicultural Round on Saturday, 29 July 2017 at Sydney Olympic Park. The Festival runs from 12pm to 6pm, and the GIANTS will be taking on Fremantle just next door at Spotless Stadium from 2:10pm.

NSW Minister for Multiculturalism, Ray Williams said the NSW Government was proud to support inclusion and participation through sport.

“This is a big win for NSW and a great moment for the people of Western Sydney and sports-lovers across our State,” said Mr Williams.

“The NSW Government is proud to have secured the marquee game and festival of the national AFL Multicultural Round in Sydney’s multicultural and sporting calendar until 2021.

“I encourage everyone to come out to Sydney Olympic Park this weekend to enjoy a day of fun and entertainment for the whole family.”