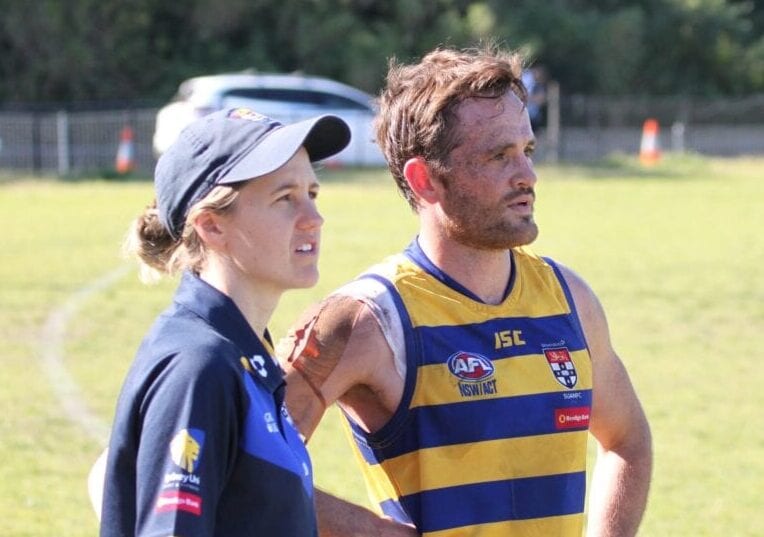 Katie Dean grew up in a football mad state with non-football parents in an era when teams for junior girls were unheard of. Despite the challenges, her footy pulse has always beaten strongly.

As a girl, Katie found footy on the ABC stumbling upon the VFL because it was on after the weekly netball highlights show. If Phil Cleary’s broad Australian accent and grassroots game analysis can’t get you hooked, what will?

Aside from the occasional school clinic, the first time Katie could get on a footy field was as an umpire. She was 14 years old, umpiring boys up to the under-18s. “That was really difficult, at times,” she said. “I was the only female as a field umpire, the other girls were boundary umpires, so I’ve tended to choose the harder path sometimes.”

The lessons in resilience, confidence and decision-making during her adolescent years no doubt impacted her skills and desire to coach in the future. Also, Katie believes umpiring held her in good tactical stead as, “it forced me to watch all the parts of the game, not just the football.”

Katie could start playing when she was 17 at school. Her love of the game only grew and she, along with a bunch of schoolmates, assembled a team to play in the local competition. They were the South Mornington Tigerettes.

From the Tigerettes to the top end, Katie then travelled to the Northern Territory for a change of scenery. Living there for seven years, she found her footy developed quickly and she was selected for the NT Thunder representative side. Who knows what could have happened to Katie if AFLW was around during these peak years, but those who’ve seen her play suspect she could have made it to the big league.

Now Katie lives in Sydney, where she works at the University of Sydney and is the Premier men’s forward coach for Growthbuilt Sydney University Australian National Football club. “Sometimes I think I should just move there,” she quips, noting that between work and coaching, she spends a lot of time at the Camperdown campus.

Katie also coaches schoolgirls at Monte Sant’ Angelo Mercy, teaching them game strategy and structures she knows will lift the quality of girls’ competitions for years to come.

She believes the two teams she coaches complement one another. On one hand is Sydney Uni, one of AFL Sydney’s most professional and successful sides, and on the other is Monte, a group of schoolgirls looking to nail the fundamentals and then talk tactics. “It’s really important to keep in touch with the core grassroots of footy,” Katie said. “Coaching both has given me so much knowledge to pass on to the girls at Monte.”

Katie Dean has seen a lot in her 20-odd years in footy as a fan, umpire, representative player and now coach. She always thrusts herself onto the frontline, pushing herself to get the most out of her talents while bringing others along the way.

She is a wise head sitting on competitive shoulders and seems to balance the pressure of the scoreboard with the enjoyment of getting out and playing with your mates: “You have to remember why we play footy and, absolutely, it’s for team success and to develop ourselves as people and as coaches and as a community group,” she said.

“But it’s also to have a lot of fun and to have relationships with people and build connections. And that’s what you hold on to after your career is over.”

Katie’s ties to the University of Sydney go beyond the football club. She works for The Matilda Centre for Research in Mental Health and Substance Use at the University of Sydney,  and is currently project managing a website providing trusted, evidence-based resources about crystal methamphetamine ‘ice’ for Aboriginal and Torres Strait Islander peoples due to launch on 21 July, 2021. Check it out here. 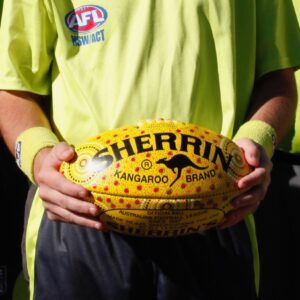