He is to football what Bradman is to cricket 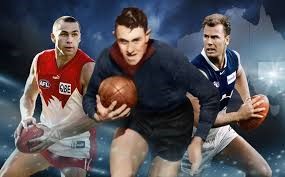 Eighty years later, he was at the front of the poster of the event that named the Greatest-Ever NSW team. Flanking him was Paul Kelly and Wayne Carey (image above).

Bunton was front-and-centre in the media in the 1930s: he wrote newspaper columns and appeared on radio shows. With his matinee-idol looks, he was booked for appearances at department stores and received endorsements for all sorts of products.

Legendary Sporting Globe football writer W.S. “Jumbo” Sharland, declared, “He is to football what Bradman is to cricket”.

He was born and bred in Albury. Bunton and his brothers Cleaver (later a Senator, long-serving Mayor of Albury and O & M football official from 1930 to 1992), and George played for Albury in the Ovens and Murray Football League.

The Bunton brothers played together in Albury’s first O & M title win in 1928 when they defeated arch-rivals St Patricks, that had won six out of seven premierships between 1921-27.

Haydn won a silver cup for fairest and best awarded on the votes of the umpires and a gold watch for the most popular player donated by the Ladies Auxiliary.

The bitter sectarianism between the two Albury clubs led to the dissolution of Albury and St Pats, and the formation of two new clubs, West Albury and East Albury for the 1929 season.

Players divided into the new teams based on residential demarcation rather than their religion. The Bunton brothers were drafted into the West Albury team that beat East Albury in the grand final.

After a run-in with the new Coulter Law over match payments that banned him from the VFL for a year, Bunton finally made his debut with Fitzroy in 1931 at the age of 20 and won the Brownlow Medal. He subsequently won the Brownlow again the next year, and his third in 1935. He lost by one vote to another triple Brownlow medalist, Essendon’s Dick Reynolds, in 1934.

He played football in the three major competitions, the VFL, WAFL, and SANFL. He also coached clubs in each of these States: Fitzroy, Subiaco, and North Adelaide.

Appointed captain-coach of Fitzroy in 1936, in addition to his employment at a department store, he wrote a column for the  Herald and earnt 6d for every “Hadyn Bunton Football Boot” sold to make him the highest-paid footballer in the country.

He led Victoria to victory at the ANFC Carnival in Perth when they beat the home team to clinch the title. It was while in Perth for the championships that Bunton agreed to be captain-coach of Subiaco for season 1938.

After serving in the army during World War II he was discharged on the eve of the 1945 season and moved to Adelaide where he joined Port Adelaide. In a major upset West Torrens beat Port in the grand final by 13 points.

Bunton was non-playing coach of North Adelaide for seasons 1948-49.

Haydn Bunton was tragically killed in a road accident in country South Australia in 1955.

The best NSW origin player in the AFL each year is now awarded the Bunton-Carey Medal based on the votes of the AFL coaches.