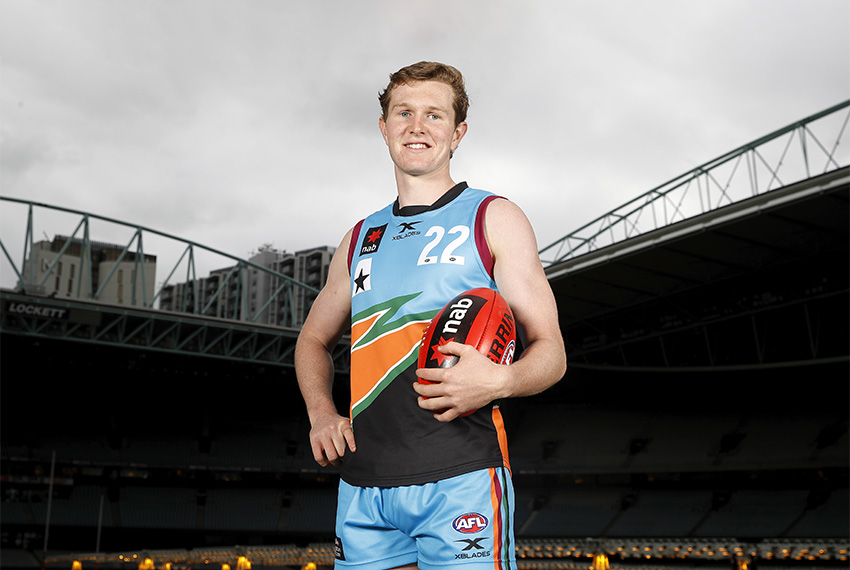 Emerging young midfielder and top-10 draftee Tom Green has extended his contract with the GIANTS in the same week he will make his AFL debut.

Coach Leon Cameron confirmed on Wednesday that 19-year-old Green will line up in the orange and charcoal for the first time on Saturday at GIANTS Stadium against Geelong.

“He’s extended by a couple of years … which is fantastic but equally he’ll make his debut on Saturday night.

“He had a terrific – not just Marsh Series, we’ve played a couple of intra clubs and scratch matches and he’s been in a really good form.

“It’s a huge tick for a young kid coming in in his first year to be picked in round one. It’s really exciting for us as a footy club.”

Green said he can’t wait to play round one, even though it will be under unusual circumstances with the Stadium to be closed to the public.

“It’s not really a tough position to be in, I’m just really fortunate to have been given this opportunity.

“Obviously I’m hoping the game goes ahead but I’m just looking forward to it. I’m really, really excited and I’m just hoping to get out there.

“It might be a bit strange but I’m just pumped to play.”

The big-bodied midfielder hails from Canberra and has been part of the club’s Academy since he was a young teen.

NSW/ACT Rams captain, Green was dominant for the GIANTS Academy in the NAB League and backed it up with NAB Under-18 All Australian selection after an outstanding Championship with the Allies.

The grandson of former Richmond legend Michael Green, he was also nominated for the NEAFL Rising Star Award after a string of impressive performances for the GIANTS’ NEAFL side in 2019.

Green signed an initial two-year contract when he joined the club at pick 10 in the most recent NAB AFL Draft and has already extended his time in Western Sydney by another two years.

Green said he’s excited to get stuck into the 2020 season.

“I’m really excited to extend my contract with the club,” the 19-year-old said.

“I’ve been part of the GIANTS for a really long time now and it really was a super easy transition to becoming a full-time footballer here.

“My first pre-season has been great and it was awesome to be part of the two pre-season games so far.

“I’m just trying to put my best foot forward for round one on Saturday.”

The GIANTS take on Geelong in round one of the AFL season at GIANTS Stadium on Saturday.