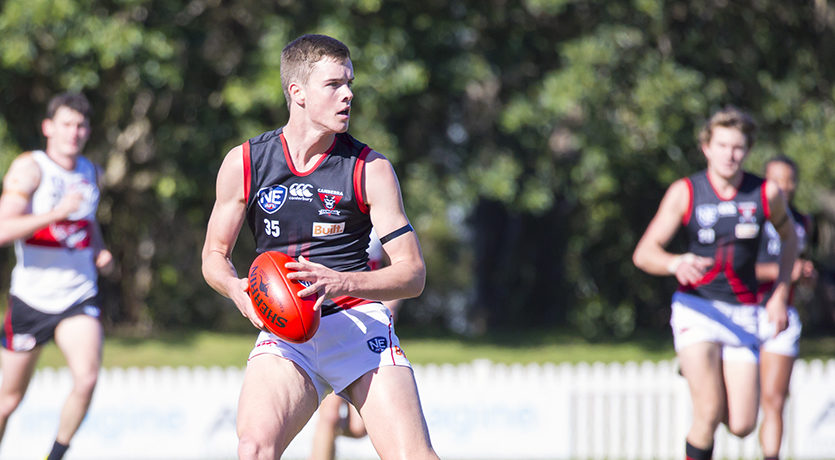 Canberra has produced its third NEAFL Rising Star nominee of the season with young defender Tom Highmore among his sides’ best in their close win over Redland on Saturday.

The 18-year-old polled four NEAFL MVP votes for his 21 disposals and seven marks in the Demons’ eight-point victory at Tidbold Park to join teammates Luke McKay and Matt Vardanega as 2016 nominees.

Highmore has been a GWS GIANTS Academy member since he was 14 and recently represented the NSW/ACT Rams at the National Under-18 Championships.

A mid-sized defender with great composure and versatility, Highmore burst on to the NEAFL scene last year when he finished runner-up in Eastlake’s best-and-fairest off just 13 games.

Highmore said it’s pleasing to be able to replay the faith coach Ben Waite showed in handing him a senior debut at a young age.

“It (senior football) a lot more difficult, there is no doubt about it. But I think through our training and the help of Ben, and taking on the advice of not just the coaches but the players, that just helps that transition from Under-18 level from being a big fish in a small pond to being a really small fish in a massive pond,” he said.

“It’s an amazing opportunity to be able to travel all around the north east of Australia on a week-to-week basis, and play at some of the best stadiums and against the best teams and AFL-listed players.

“Ultimately I’d like to get drafted, but the short-term goal is to keep my spot in the Demons line-up and take it week-by-week.”

The Rising Star is awarded to the most promising young talent in the NEAFL competition.

Nominees must be under the age of 21 and played less than 20 senior games (excluding games as AFL top-up players) at the start of the 2016 season.