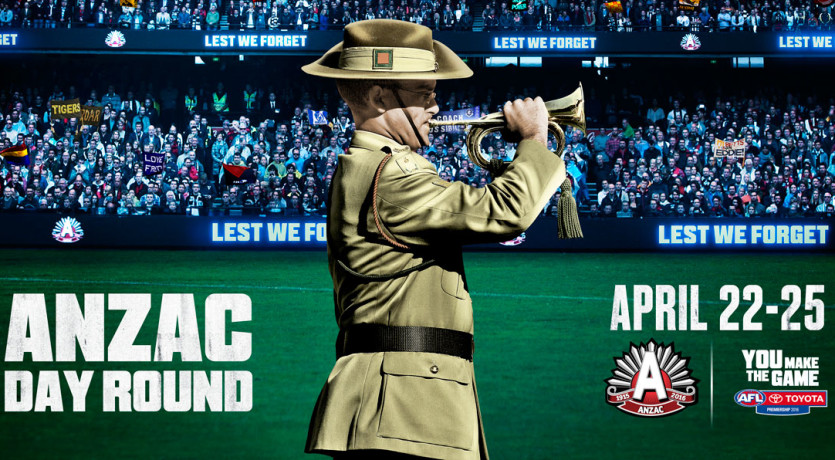 Anzac Day Round is one of the most revered weekends of football on the AFL calendar.

Collingwood and Essendon will play in their 22nd traditional Anzac Day game at the MCG on Monday as the nation takes timeout to pay tribute to our war heroes.

There’s also an Anzac blockbuster at the SCG on Saturday as the Sydney Swans face old rivals West Coast but it’s not the only fixture in NSW and the ACT this weekend that commemorates Anzac Day.

Anzac Day at Picken Oval has become a key event on the AFL Sydney fixture.

Western Suburbs take on Pennant Hills in the Premier Division at the historic ground following its very own memorial service run by it’s major sponsor the Canterbury-Hurlstone Park RSL Club.

The service features a band, bugler and the laying of wreaths while the teams and umpires line up on the field before the bounce.

Western Suburbs President Nick Miller says if you’re going to get to one game this year this is the one to get to.

“We look forward to seeing a huge crowd at Picken Oval on Anzac Day for a great game of AFL,” Mr Miller said.

“Reigning Premiers Pennant Hills will be formidable opponents for us on this important day which we always enjoy being a part of.”

There are key events on in Canberra this Saturday at RMC Oval and Alan Ray Oval.

ADFA/RMC Rams take on Tuggeranong in Division 4 at 12pm which is followed by the ADFA/RMC Rams playing against Goulburn in Divison 3 at 2:15pm.

A special ceremony will take place between the two games involving uniformed servicemen and women followed by a drill performance at halftime of the Division 3 match.

Three games will be hosted by the Ainslie Tricolours at Alan Ray Oval and tributes include a commemorative coin for the toss and the Last Post prior to the bounce.

The Wagga Tigers host a significant event at Robertson Oval in conjunction with the Wagga RSL Sub Branch.

After a dawn service, breakfast at the RSL and an Anzac Day march through town local residents can get down to Robertson Oval to catch the Last Post before a Commemorative Match between the Wagga Tigers and Collingullie Glenfield at 4pm.

Footy clubs across NSW and the ACT will have their own unique tributes for Anzac Day this weekend so get down to your local ground to be a part of the special occasion.

If you want to commemorate Anzac Day with the Sydney Swans when they face West Coast click on this link.