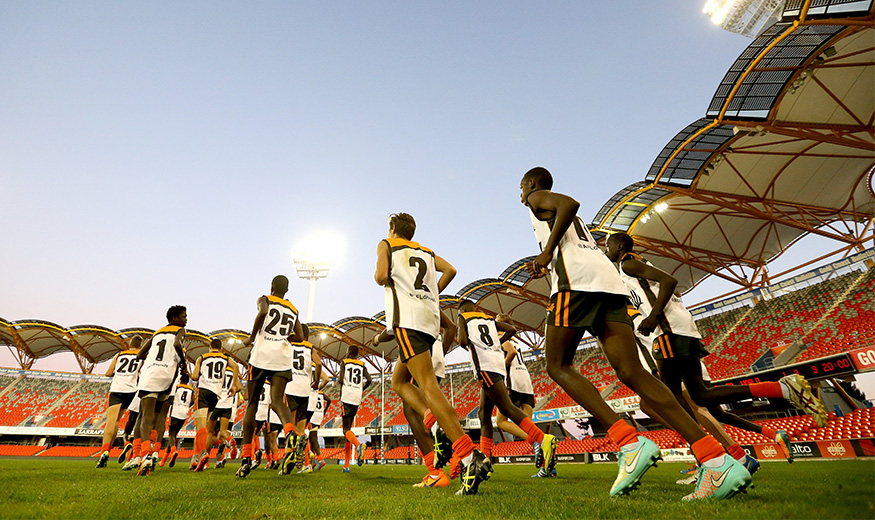 The 2019 Rio Tinto AFL Flying Boomerangs and World Team programs will commence in Melbourne this week from July 7-13.

Selected by NGA Managers and AFL Club recruiters, following a state talent program and talent identification camp, the respective squads of 25 young men have been chosen to participate in the week-long programs based on school attendance, leadership skills, and football ability.

Supported by Rio Tinto, the AFL Flying Boomerangs program is a personal development and leadership program for Aboriginal and Torres Strait Islander young men aged 14-16 years old. Meanwhile the World Team is made up of the best upcoming AFL multicultural players from across the country.

The two squads will fly to Melbourne today and take part in a number of cultural, education and football training sessions throughout the week, before going head-to-head in two exhibition matches at Trevor Barker Oval on July 9 and July 12.

AFL General Manager Game Development, Andrew Dillon, said it was exciting to see the next generation of Aboriginal and Torres Strait Islander and Multicultural talent showcase their skills.

“The Rio Tinto AFL Flying Boomerangs and World Team programs are vital parts of the AFL talent pathway system and provides a great platform for the next wave of Aboriginal and Torres Strait Islander and Multicultural talent to develop not only their football skills, but leadership skills which they can take back to their local communities,” Mr Dillon said.

“We look forward to watching Australia’s best Aboriginal and Torres Strait Islander players and the top Multicultural talent from across the country showcase their skills in what promises to be two exciting games of football.”

The two exhibition games will LIVE STREAMED from 10am -12pm (AEST) on Tuesday July 9 and from 12pm- 2pm (AEST) on Friday July 12 via the AFL Victoria website aflvic.com.au.

Rio Tinto is the principal partner to all the AFL’s Indigenous Programs. Rio Tinto is one of Australia’s largest employers of Indigenous people, employing some 1500 Aboriginal and Torres Strait men and women across the nation.