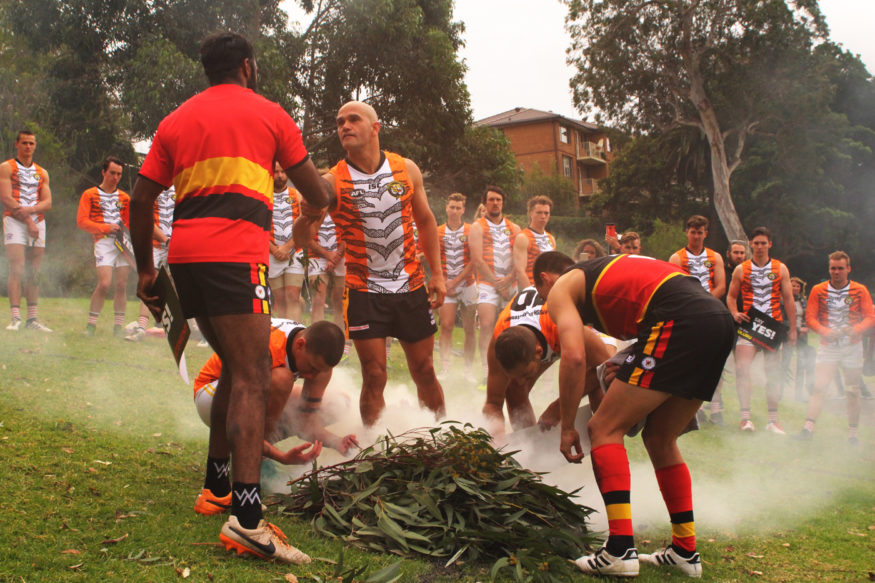 AFL NSW/ACT is proud to celebrate the 2019 Toyota AFL Sir Doug Nicholls Round, with football clubs across New South Wales and the ACT acknowledging and paying tribute to the significant contribution Aboriginal and Torres Strait Islander peoples have made to our game.

AFL NSW/ACT CEO, Sam Graham said he is thrilled to see the New South Wales and ACT footy communities come together to celebrate the historical and ongoing contribution made by Aboriginal and Torres Strait Islander players, coaches, umpires, officials and volunteers to the game.

“Right across our football community, from the grassroots to the elite, this weekend our code comes together to acknowledge and celebrate Aboriginal people and their culture,” Graham said.

“To see so many of our community clubs from across the state and territory celebrating and honouring the round is fantastic and I encourage everyone to get out and support your local club this weekend.”

Yesterday, AFL NSW/ACT in partnership with NASCA, hosted the First Nations Cup at Glebe’s Jubilee Oval as approximately 60 Indigenous high school students participated in a fun-filled afternoon of AFL 9s and a range of traditional games, including Marn Grook.

Tonight, the Sydney Swans will host Marn Grook at the SCG, against Collingwood. An Indigenous ceremony will be held in the lead up to the game and members of the Aboriginal Community will form a guard of honour for the players. At half-time, Indigenous Auskickers from across the state and territory will have the opportunity to showcase their skills on the hallowed turf of the SCG.  Following the final siren, players and staff from both the Sydney Swans and Collingwood will be linking arms to make a stand against racism.

Playing away in Melbourne this weekend, the GWS GIANTS will back up and don their Indigenous guernsey again for their home crowd when they take on the Gold Coast Suns at GIANTS Stadium at 1:35pm on Saturday, June 1.

Aboriginal artist and Yuin woman, Rheanna Lotter has designed the specially made Sherrin footballs that will feature in the Sir Doug Nicholls Indigenous Round. An AFL Sydney player and coach for Southern Power, Lotter has previously designed uniforms for sporting teams including the 2018 Winter Paralympics, the GWS GIANTS 2017 Indigenous Round, Sydney Thunder and Sydney Sixers.

Celebrations for Sir Doug Nicholls Round will extend beyond the SCG and GIANTS Stadium with football teams from across the State and Territory set to play in special Indigenous guernseys and celebrate with a range of activities this weekend: