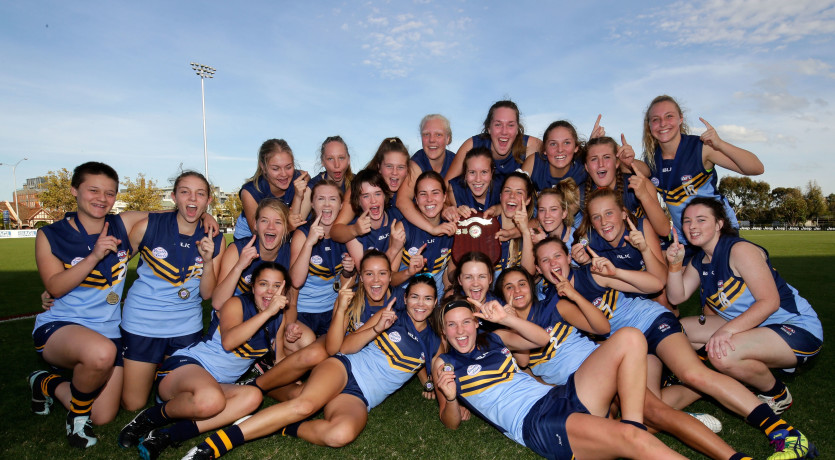 The NSW/ACT squad, made up of Under 18s girls from across the region, started the week with an impressive win. Coming up against the Woomeras – a team formed from some of the top Under 18s Indigenous players from around the country – NSW/ACT took early control of the match.

Using a well-structured line of defence to shut down any attacking advance by the Woomeras, NSW/ACT kept their opponents scoreless, and set the scene for a successful week at the Championships.

“Being able to play a more attacking style of game play as our skill level has increased, [meant we were] able to hit targets on a more consistent basis,” Female Football High Performance Coach, Tim Schmidt said of his team’s growth in recent months.

After a day’s break, NSW/ACT continued their strong campaign with a 54-point victory over the NT Thunder on Day Four of the Championships.

Throughout the match, Erin McKinnon controlled the ruck giving the NSW/ACT midfielders first chance at the football, whilst Stanton continued her domination up forward by kicking four goals. Combining with midfielder Alyce Parker – a described “ball-magnet” by Schmidt – the NSW/ACT girls were unstoppable on the road to the Division Two final.

The last match of the tournament for NSW/ACT saw them face a competitive opponent in South Australia, who entered the match undefeated after wins against both Tasmania and the Woomeras.

Though South Australia were eager to defend last year’s title, it was NSW/ACT who stormed out of the blocks, kicking four goals to zero in the opening quarter.

NSW/ACT’s attack on the ball, relentless pressure, and high-level of skill were evident throughout the four quarters, finishing the match 10.12 (72) to South Australia 1.1 (7) in front of a healthy crowd at Punt Road.

NSW/ACT also claimed four spots in the Youth Girls All-Stars squad who will play in the curtain raiser to the Women’s Exhibition game between Melbourne and the Western Bulldogs in Melbourne later in the year.