Sydney is the scene for AFL Finals 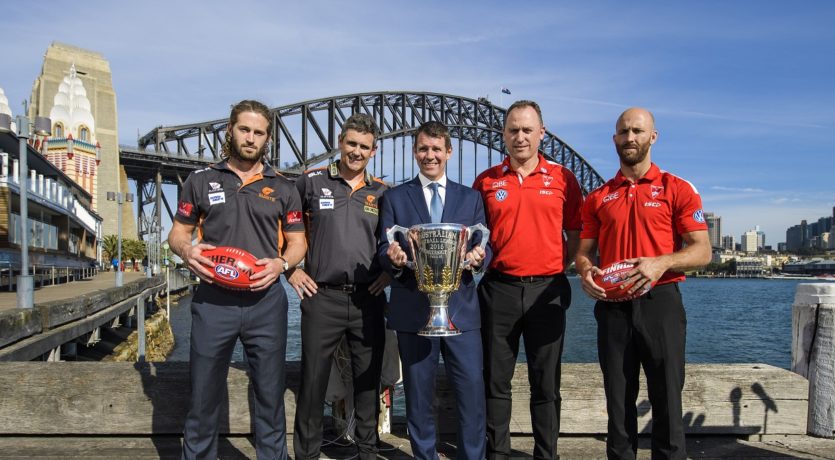 For the first time in the history of the AFL, two Sydney teams will face-off in Week One of the Toyota AFL Finals Series on 10 September 2016 at ANZ Stadium.

After an exciting final round of football where the Sydney Swans won the Minor Premiership and the GIANTS moved into fourth position on the ladder, it was decided that Sydney Derby XI would take place in the Harbour City.

With the Sydney Swans and GIANTS Captains and Head Coaches both in attendance at the launch, Premier Baird acknowledged the enormity of the all-Sydney final for football fans in New South Wales.

“What a blockbuster we have in store for us,” said Baird.

“The AFL is undoubtedly catching alight here in this great city, and across the state.”

“All of us have the opportunity to see this fantastic event, not just at ANZ Stadium, but over the coming weeks as we march towards the Grand Final.”

“The dream is a Swans and Giants Grand Final – I don’t think it’s much of a dream anymore. I think it’s going to be a reality, I’ll call it here first.”

No matter the outcome on 10 September, the SCG and Spotless Stadium will host either a Semi or Preliminary Final in Weeks Two and Three of the series, to determine the road to the Grand Final on 1 October 2016 at the MCG.

Sam Graham, CEO of AFL NSW/ACT says this is a truly historic occasion.

“This is just fantastic for our code,” said Graham.

“AFL is growing at all levels across New South Wales and the ACT, and to have two of our local teams finish in the top four is exciting for all participants in our game.

“I’d encourage the whole AFL community, as well as those new to the game, to pick their colours, and get to ANZ Stadium to be a part of this history making event.”

Proving the significance of the occasion, such an event has happened only once in Adelaide’s ‘Showdown’ history (2005), and has never occurred in the ‘Western Derby’. The all-Sydney Qualifying Final has come within five years of the GIANTS entering the AFL competition.

Tickets are on sale now via Ticketek with family passes selling for $70.00.