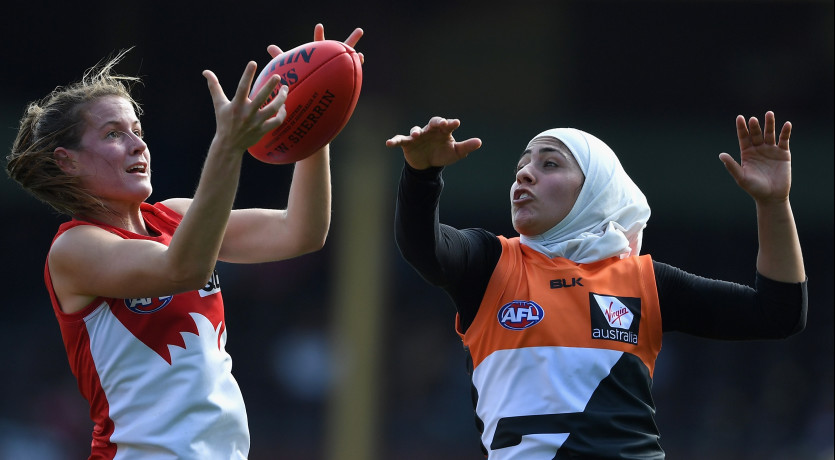 Ahead of NSW/ACT’s representative match against South Australia on Sunday, 5 June at Adelaide Oval, we profile some of the players to watch – first up is Nicola Barr.

Nicola Barr is a 20-year-old Sydney Swans Academy member who plays for Sydney University in the local AFL Sydney competition. Having transitioned seamlessly from the Youth Girls competition into the senior program, Barr is a key player for NSW/ACT who runs tirelessly through the midfield, accumulating possessions aplenty. Working hard on her fitness and skills over the pre-season, Barr is set to lead through the middle for her state this weekend.

How did you get into playing AFL?

Late in Year 10 at school (Queenwood on Sydney’s North Shore) our sports director, Daniel Kozey approached a bunch of different girls who were fit and coordinated, and asked if we wanted to play in a schools State AFL Gala Day. I had never played before but went along and enjoyed playing so much that I haven’t looked back since! From that day, I went on to trial for the NSW/ACT Youth Girls team, and was almost surprised when I was picked to play in the AFL Youth Girls National competition in 2014.

Which sports were you playing before you started in AFL?

At school I played many different sports including soccer, netball, cross country, athletics, touch football, tennis and volleyball. I always loved my sport and found it difficult to pick one to focus on at school. I started getting a little bit serious about soccer in Year 10, playing for Manly United U16s, but since I left school I have focused on AFL, which has been the best decision I have ever made.

Do you have a career highlight so far?

I can honestly say I have enjoyed every moment of my AFL career so far. But if I had to pick a highlight, I would say playing on the SCG in the Sydney Swans vs. GWS GIANTS Female Academies game. Playing on the SCG was amazing and an experience I will never forget.

Why have you chosen to play AFL?

Out of all of the sports I have played, AFL, for me, is the one that you support your team mates the most; not only on the field protecting your teammates, but also in the way you the bond off the field. Another reason I chose to play AFL is that it is a ‘full body’ sport; you can tackle, run, mark, kick and handball, and I love that AFL incorporates all of my favourite aspects of each of the various sports I played when I was younger.

The toughest thing about playing AFL is the possibility of injury. But this has never stopped me – I always think if you go in 100%, you’ll come out 100%, and you can’t let the risk of injury stop you from playing your best footy.

Which team do you barrack for in the AFL?

I am originally from Melbourne and barracked for the Saints as a young kid, but I only really started getting into footy when I was living in Sydney, so now I’m a big Swannies fan with a big soft-spot for the Saints!

You can watch Nic Barr and the NSW/ACT State Representative team take on South Australia LIVE on Fox Sports 3 on Sunday, 5 June at 12:35pm (Adelaide time).