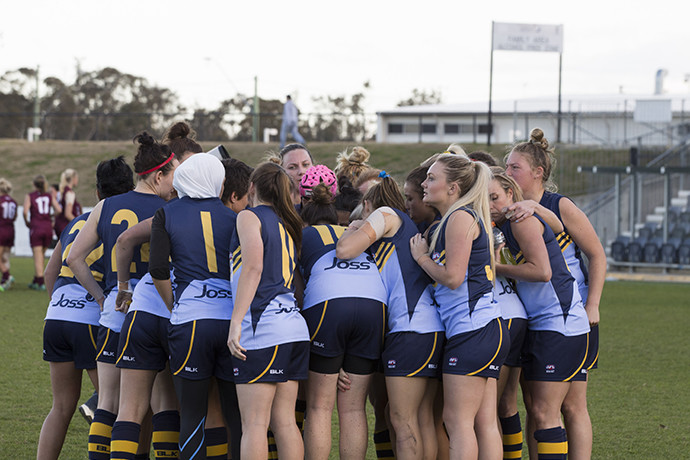 NSW/ACT will be aiming to consolidate their recent hold over South Australia when the two female open state squads face off on Sunday at Adelaide Oval.

Following NSW/ACT’s victory over South Australia in the recent Youth Girls Division Two Grand Final, the opens (ages 18 and up) will look to continue NSW/ACT’s momentum in front of a national audience, with the game being broadcast live on Fox Sports 3.

Noting NSW/ACT’s marked improvement over the past six months, following the opening of the Sydney Swans and GWS GIANTS Female Academies, lovers of the game can expect a close battle between the newly formed rivals.

The NSW/ACT squad travelling to Adelaide will remain as announced in April, with very few injury concerns interrupting preparations.

NSW/ACT Head Coach, Tim Schmidt says that his side is on track to perform as one during Sunday’s match.

“Preparations have gone well to date. The girls have been training hard in their regional Academies, and we had a great training camp a couple of weekends ago where the girls really started to gel together,” says Schmidt.

“We are after everyone playing their role for the team. If we do this and play to our structures, then hopefully we will have a good day.”

Sydney Swans Academy member and former Western Bulldogs draftee, Maddy Collier will be one to watch throughout the match with her backline efforts being a key way forward for the NSW/ACT team.

“Collier didn’t find as much of the ball as she would have liked in the first exhibition game against the GWS Giants, but she is a very classy player, and hopefully she can step it up another notch on the big stage.”

Nicola Barr and Monique Hollick are also set to run the ball with Schmidt labelling them both as ‘running machines’ who will get plenty of the Sherrin throughout the game.

Hannah Wallet will be the target up forward for the NSW/ACT team with her reliable pair of hands ready to compliment a strong set of skills across the attacking line.

From a South Australian perspective, Schmidt expects a one-on-one style of play with plenty of stoppages in large thanks to their tackling pressure, ensuring a close contest across the four quarters.

“All of their players can be damaging, that is why they are in the team, and however, there has been a couple of standouts for them over the last couple of games.

“Ebony Marinoff has been excellent in both South Australian state games. She has been a clearance machine and finds plenty of the ball.

“Danielle Goding during the South Australia Blue versus Red match, in ruck was dominant all game also.”

With both states backing bids for teams in the National Women’s League beginning next year (via the GWS GIANTS and Adelaide Football Club), there will be plenty to play for on the day as this journey to 2017 continues for the women of the AFL.