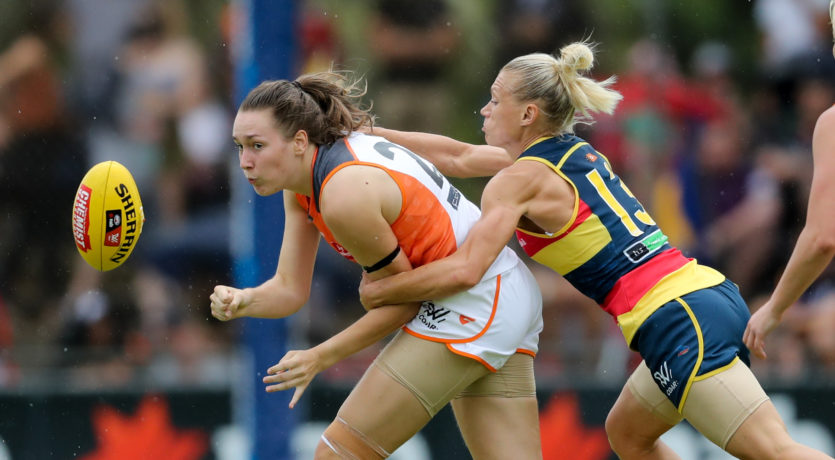 ADELAIDE, AUSTRALIA - FEBRUARY 4: Erin McKinnon of the Giants tackled by Erin Phillips of the Crows during the 2017 AFLW Round 01 match between the Adelaide Crows and the GWS Giants at Thebarton Oval on February 4, 2017 in Adelaide, Australia. (Photo by AFL Media)

Erin McKinnon of the Giants tackled by Erin Phillips of the Crows. (Photo by AFL Media)

Young GIANTS ruck Erin McKinnon has been recognised for a stand-out performance with a NAB AFL Women’s Rising Star nomination in round three.

The 18-year-old is the youngest player in the AFLW competition; and standing at 189cm, is also the tallest.

Having grown up in Sydney, McKinnon was drafted at pick 48 in the inaugural NAB AFLW Draft the day before her HSC exams.

“The presence that Erin has in game to give our mids first use of the ball is exceptional,” he said.

“To be the youngest in the competition and to have 54 hit outs in the last two games really shows her developing confidence and ability.

“We’re delighted with Erin’s development and this nomination is great recognition for her performances so far.”

At 14, McKinnon fell in love with the game when her brother started playing Auskick but was told she couldn’t play due to a lack of female players in the local area.

Her local club, the Mosman Swans, told her they’d support her by providing uniforms if she could find enough players to make a team.

McKinnon rounded up some local girls and her mum undertook a coaching course to form the club’s first-ever Youth Girls team. She then went on to be named in the All Stars team following last year’s National Youth Girls Championships before joining the GIANTS.

“Over the last two seasons, Erin has really developed her rucking ability and continued her dominance in the ruck contests from Youth Girls last season,” Schmidt said.

“Erin’s a great example of the growth of the game in NSW and I look forward to seeing her grow into one of the stars of the competition in the years to come.”

McKinnon won 31 hit-outs in the GIANTS’ draw with Fremantle at Blacktown International Sportspark on Saturday, dominating the ruck battle against the Dockers’ Kelly Clinch.

She has averaged 19.3 hit-outs across the three games and is ranked third in the competition for hit-out and fourth for hit-out to advantage.

The GIANTS’ next AFLW home game is part of a huge double-header at Blacktown International Sportspark on Friday, March 3.

Click here to buy tickets for the double-header (AFLW and JLT Community Series). 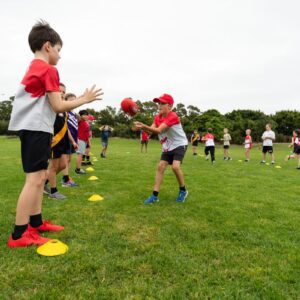 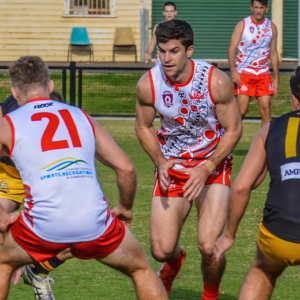 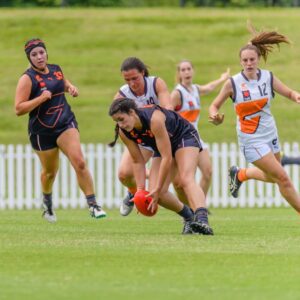