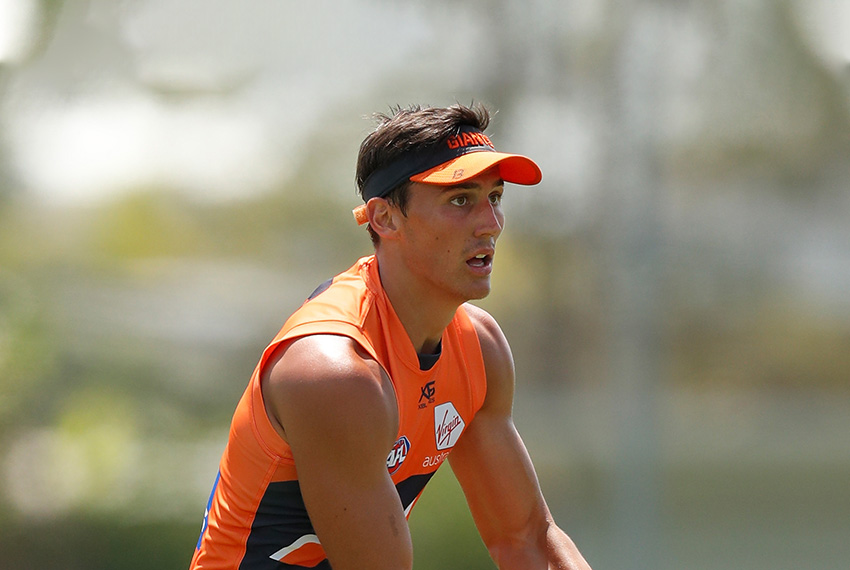 The boy from Broken Hill took on a Brownlow Medallist and won.

“We were at lunch the day ‘Danger’ (Geelong’s Patrick Dangerfield) did it and they sort of said to me that I could do better.

“We got back from lunch and I went into the gym and all the boxes were set up and Himmel was there with his phone out and he told me to do it. I thought I’d better keep him happy.”

He has far bigger obstacles that he wants to take on in 2020.

The 21-year-old played five games in 2019 and was an emergency for each of the GIANTS’ finals.

On Grand Final eve he sat alongside Harry Perryman in the Grand Final parade and, despite warming up as an emergency on Grand Final day, he watched on from the sidelines as his teammates were downed by Richmond.

“There’s nothing like playing finals footy and I can’t wait to get a taste of that if the opportunity arises.”

Now, with the Marsh Community Series fast approaching, competition for selection is beginning to heat up.

“The earlier the better; Marsh isn’t too far away and it’s the first opportunity for you to stamp your authority on the spot you’re playing in,” he said.

“It’s exciting, I’m in my fourth year now and while I haven’t had the taste I’d like, the aim is to just play a good Marsh Series and hopefully get a spot in the round one team and hold it for as long as I can.”

“The conversation from being drafted was my fitness, I guess, and going into my fourth year I feel like my tank has increased a lot since my first year,” he said.

“I came back from Christmas break and ran a really good 2km time trial.

“I think the natural abilities that I have like my kicking, my marking and my leaping will all take care of itself and it’s just being able to get through AFL games without too many rotations and knowing the set-up that will hold me in good stead.”