A complete guide to the AFL bidding system 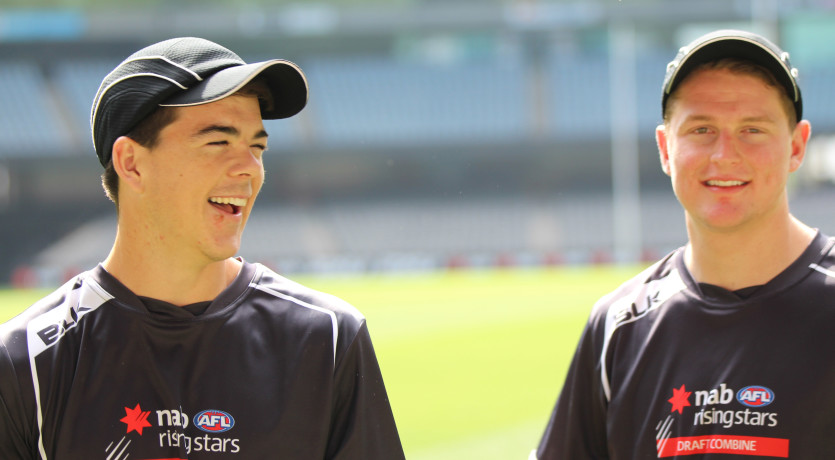 Have you struggled through many sleepless nights trying to work out how the AFL’s new bidding system works? Don’t worry: your questions, concerns and ‘what ifs’ are all answered here.

Why do we have a new bidding system?

It was brought in to make clubs pay ‘market rates’ for father-son draftees, as well as kids in the four northern academies run by Sydney, GWS, Brisbane and Gold Coast.

Neither GWS nor Gold Coast will be able to acquire father-son players for many years.

What are the northern academies?

Programs run in the two northern states. Each club has a designated area, and can pour as much money into it as they like.

The clubs are club-branded and were put in place to help improve participation in those areas, better develop talented juniors, build draft numbers on take on other sporting codes.

They’re also designed to strengthen the NEAFL and the community clubs and competitions in those states. Most of the players who go through the academies won’t get drafted, but they should go back to their NEAFL or local teams as better players.

Kids are identified at about 12, and start off with occasional training sessions. As they get older, the most talented players are filtered through.

Why do we need them?

Draft numbers from Queensland and NSW-ACT have been traditionally poor, in comparison to other states. Victorian players represent more than half of every draft.

There’s also the bigger picture, as mentioned in the above answer, of growing the game in non traditional areas and strengthening the second and third tier competitions in those states.

Not many of the other things trialled by the AFL – such as the NSW scholarship scheme, where clubs could sign a kid and work with him until draft age – have been particularly successful.

Taylor Walker, Craig Bird, Will Langford and Jarrod Witts are the most accomplished players to have come through that program, and Walker grew up in an AFL area, Broken Hill.

With Gold Coast and GWS entering the AFL in the last few years and the competition requiring a deeper talent pool, these two states have been seen as key areas for development.

That the academies are club-branded is also significant.

The idea is that showing a talented 12-year-old living in Newcastle and being fought over by different spots a direct pathway to the Swans is a compelling selling point for the sport.

NRL clubs, for instance, can directly sign talented teenagers (at 13 in some instances) without having to put them through a draft. Newcastle’s Isaac Heeney has become the poster boy for the Academy system.

Why do the northern clubs get first call on them?

It’s an incentive for them to invest money in their academies and develop talent not only for them but for the rest of the competition.

Are all the other clubs fine with this?

Philosophically, all of them would support the need to increase the overall talent pool by better developing kids in the northern states. More good players to pick from = happy clubs.

However, they can see the potential for the Giants, Swans, Lions and Suns to keep accessing top-level talent, cheaply, year after year, and are frustrated they won’t ever get a real shot at the very best kids.

Most think the AFL needs to revise the GWS zone, which takes in the Riverina, a traditionally strong football area.

Others take issue that while a couple of the clubs put a lot of money and time into their academy kids, others make a far less significant investment and still get first dibs on the good players.

Many people believe the AFL should take over the running of them and that all players should be available to everyone.
The counter-argument to that, as mentioned earlier, is that having attaching the clubs to the academies is a key part of attracting talented kids who have other sporting opportunities and offers in front of them.

The thought is boys in Sydney, for instance,would be more drawn to the idea of playing for the Swans, than simply playing in the AFL.

For clubs such as Brisbane, who have struggled to keep interstate draftees at the club, a well-run academy program could be critical to their future success.

Do the other clubs get any benefit?

Hopefully, the academies will become so successful that the northern clubs simply won’t be able to take all of the good players, meaning some will spill through to other clubs in the draft.

Also, having to bid for players means clubs have to pay more attention to them and the teams they play in, meaning they may then notice others.

How did bidding used to work?

From 2009-2014, a bidding meeting was held right before the start of the trade period. Clubs had to nominate their eligible players a few days earlier, on the last day of the draft combine.

At the meeting, clubs were asked if they wished to bid for one of the nominated players. When a bid was placed, a nominating club had to use its next available pick in the draft to match the bid.

If they chose not to match the bid, the club that placed the bid was able to take the player. That scenario never unfolded.

Why couldn’t we just stick with this system?

Firstly, holding bidding so close to the end of the season meant clubs had little time to complete their assessment of them, and make a thorough decision on whether to bid, and where.

They had no idea, when bidding, which other players they were potentially passing up on.

Last year, Melbourne bid pick 2 for Isaac Heeney and Sydney was able to match with pick 18.

That’s a huge gap, but it wasn’t the only issue that the AFL could see becoming more significant as the academies began to produce higher-quality players.

Had another club then bid for Jack Hiscox with pick 3, the Swans, having already grabbed Heeney with 18, would only have needed to use a second round selection to get him.

Heeney is an extreme example/case study – no-one has ever bid that high for a father-son or academy kid before. Melbourne’s poor year and the Swans’ high finish created the gulf.

The new system was really a pre-emptive move, in case the states do start to have more than one top-end player graduate from their academy in the one year.

The northern clubs would argue that the new system is a huge over-reaction to the extreme/ unique example of Heeney.

ie, the Swans set up their academy, found a major sponsor, hired good coaches, poured a lot of money into it and then found and developed Heeney, from Newcastle, where he was good at a number of sports.

Their point would be that they were attacked by some of the Victorian clubs for doing too good a job.

OK. So how does it work?

The first thing you need to know about is the Draft Value Index.

Basically, every draft pick from 1-73 has been allocated a numerical value, or number of ‘points.’

Pick one is worth 3000 points, and pick 73 is worth nine. Picks placed below that have no value. A top five bid could see the Swans have to cough up more than 1500 points to secure Cal Mills. Image: Sam Canavan.

How did they decide on those numbers?

The league looked at what players chosen at each selection between 2000-2014 had gone on to earn, then smoothed the graph out.

This data was considered the strongest available indicator of the relative ‘market’ value of the players chosen at each selection in that period.

OK. So when does bidding happen now?

Bidding will now take place live on draft night, as the draft is unfolding.

This was seen as a way of ensuring clubs place genuine bids, and know exactly which other prospects are available to them before deciding whether to bid or not.

As mentioned above, when bidding was done six weeks before the draft, they were largely guessing about which other players would be available at the selection they were using to bid.

Now, rather than match a bid for one of their players using their next pick, the academy club will have to match the number of points attached to the selection bid for him, as per the DVI.

That might mean clubs need to use two or more picks to match a bid for one player, depending on how early the bid is made.

OK. So let’s pretend this was all in place last year. Melbourne would actually have called Heeney’s name out on the night, when it was their turn to pick at No. 2?

Yes. Sort of, anyway. The AFL and Champion Data have developed new draft software to accompany the new system and draft night will look very different this year.

The clubs will be set up in a room next to the main draft room. They’ll be partitioned off from each other, for privacy as they discuss their selections.

When it is their turn to pick, they will be prompted to select the name of the player they wish to draft from a drop-down menu.

They then submit the selection. It will be approved by AFL officials, and then announced as part of the telecast.

That means no more 15 seconds of fame for the nicest, hardest working, most genuine people in footy – the recruiting managers.

Some are quite upset…. word on the street is that the number of draft eve haircuts/fake tan appointments/last-minute gym sessions will drop significantly.

Wouldn’t it be good to have cameras on the clubs as they decided whether to match bids or not?

It would be awesome. Oh well…

To continue reading this article go to The Age website.