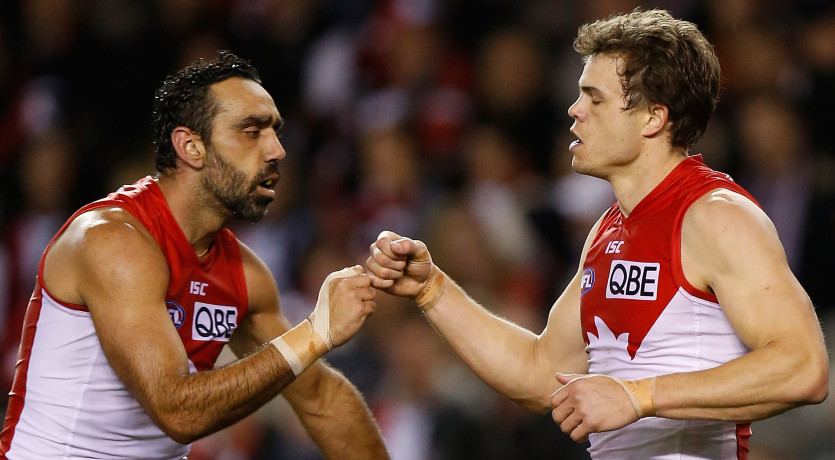 MELBOURNE, AUSTRALIA - AUGUST 30: Adam Goodes (left) and Mike Pyke of the Swans celebrate during the 2015 AFL round 22 match between the St Kilda Saints and the Sydney Swans at Etihad Stadium, Melbourne, Australia on August 30, 2015. (Photo by Michael Willson/AFL Media)

It’s going to be a memorable occasion at the SCG tomorrow.

Sydneysiders will have the opportunity to bid farewell to one of the AFL’s most decorated players Adam Goodes.

The dual Brownlow medallist who played 372 games for the Sydney Swans will be front and centre during a lap of honour at halftime of the Sydney Derby alongside fellow retiree Mike Pyke.

It promises to be a special experience for supporters as they celebrate the career of the two-time Premiership player who gave 16 years of loyal service to the Bloods and retired after last year’s semi final against North Melbourne.

The halftime Auskickers will also pay tribute to the four-time All Australian by wearing the 2016 Sydney Swans Indigenous guernsey designed by Adam Goodes’ mother Lisa.

While it could be the last opportunity to say goodbye to one of the game’s greats, supporters will be treated to the first ever women’s AFL match played at the SCG at 1:40pm.

The Sydney Swans and GWS GIANTS Women’s Academy sides will not only be playing for bragging rights but also for selection in a NSW/ACT state team that will take on South Australia at Adelaide Oval in June.

There’ll be international interest in the game as well.

Two gifted girls from the USA have travelled to Sydney for the match after being identified in the national talent search.

The women’s game acts as a curtain raiser to the highly-anticipated Sydney Derby between the Sydney Swans and the GWS GIANTS which gets underway at 4:35pm.

Be a part of history tomorrow at 1:40pm and see the first ever women’s game at the SCG by securing your ticket here.

If you can’t make it to the ground you can watch the game online by following this link.