Matthew Kennedy aims for Round One 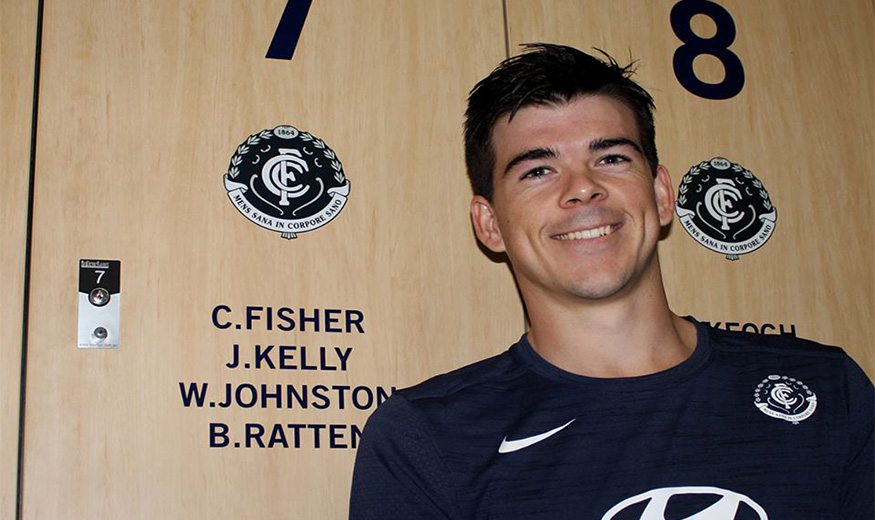 Originally published by The Age.

On a burning hot day when the Blues were put through their paces, the lure of a round-one debut helped recruit Matthew Kennedy get through another demanding session.

Kennedy left Greater Western Sydney and headed to Princes Park through the trade period, in exchange for pick 28, and is seen as a man who can provide depth and toughness in a midfield now missing Bryce Gibbs.

He played 16 matches last year but none after round 21, missing out on the Giants’ finals run.

A product of Collingullie in the NSW Riverina, Kennedy’s focus is on strengthening his surgically-repaired shoulder and impressing through the pre-season to secure a spot for the opener against Richmond.

“Obviously, round one is the goal. It would be awesome to play in front of 90,000 probably in round one against the Tigers, the premiers, Essendon, and other big rival clubs,” he said.

“It’s something that I am really looking forward to and, hopefully, can stay fit and fresh and out on the park.”

Kennedy had been unable to establish himself in a potent Giants’ midfield. He featured in 19 matches over two years since being pick 13 in the 2015 national draft, including 16 last season, averaging 17.2 possessions and 4.6 tackles, but was not seen after the late-season win over the Western Bulldogs.

He is regarded as an inside midfielder who can develop at the same time the rebuilding Blues look to improve as a team, having enjoyed only six wins last season, including just one after round 14.

“I have worked on my fitness and strength. I am keen to work on those two areas, get to learn the new game plan and stuff like that. I have been doing a lot of work with the coaches, just knowing the basics first then getting a bit more stuck into it,” Kennedy told the Blues’ website.

He returned from a Christmas break fresh, having spent time on the family farm.

“It was a pretty cruisy break for myself – just went back home and caught up with family and travelled out to the farm a few times. [I did] a bit of work out there with the old man, little cousin – that was good fun. I am feeling refreshed and ready to get stuck back into it,” he said.

Gibbs was not only an elite midfielder but a long-time leader. His decision to head home and join Adelaide meant there was a void to fill, and skipper Marc Murphy, injured All-Australian Sam Docherty, young star Patrick Cripps and hard-nosed midfielder Ed Curnow have been proactive.

“I believe we have a really strong leadership group in Murph, ‘Crippa’, even ‘Doc’, being out with his knee but being able to have a real input and drive,” Kennedy said.

“The way Ed Curnow goes about his training, really sets it [example] for the boys. It’s just good to see everyone buying into it and no one really being the main one, everyone contributing.”