GIANT redevelopment in the ACT 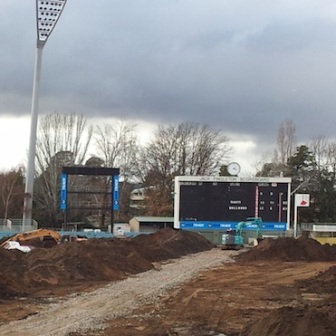 This article and photo first appeared on gwsgiants.com.au

This week 3000 cubic metres of top soil is being dug up, and transported to the National Arboretum Canberra.

The playing surface of the oval dates back to the 1920s – and has just been topped up since. The consequent hardness of the surface and lack of adequate drainages created an injury risk for players and made the surface water logged after rain, presenting the risk of events being cancelled after a relatively small amount of wet weather.

StarTrack Oval is Canberra’s premier venue for Australian rules and cricket, and the redevelopment works are being undertaken to bring the surface up to a world-class standard.

The replacement of the playing surface is scheduled for completion before the Prime Minister’s XI cricket match to be played on 14 January 2014.

The upgrade of the oval includes:

Once completed, the redevelopment will increase the ground’s capacity from its current 13,500 to more than 15,500, and boost the chances of StarTrack Oval hosting Cricket World Cup matches in 2015.

StarTrack Oval is an iconic part of Canberra’s history with construction having commenced in 1924. These works mark an exciting new stage in the ground’s development, which will help bring it up to the standards expected by both players and spectators.

Improving amenities for spectators, players and the media is an important step in bringing top class sporting fixtures to Canberra and will also be a significant boost to our economy with many people travelling from the region to enjoy matches at StarTrack Oval Canberra.