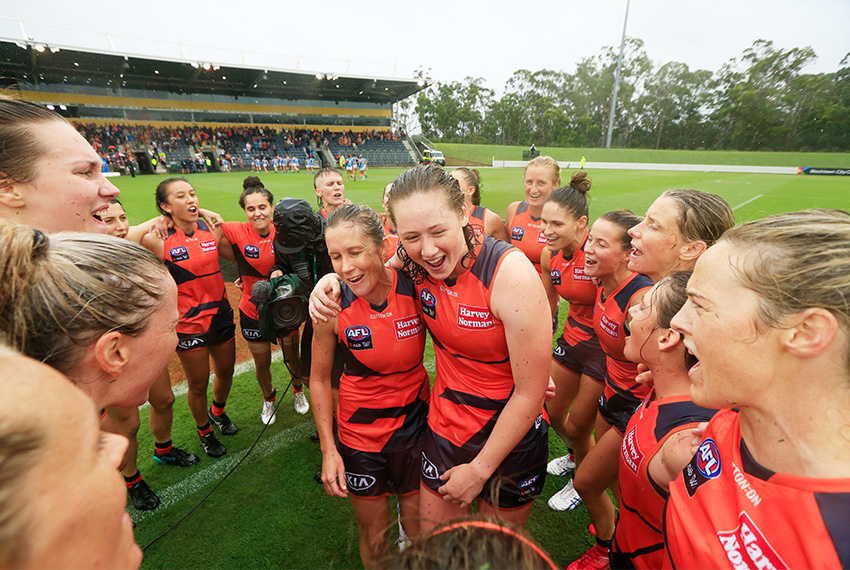 With heavy rain sweeping across New South Wales throughout the weekend, the GIANTS got the better of a hard-fought slog that saw just two goals kicked for the afternoon.

Former NSW/ACT Ram Alyce Parker was the architect of the slender one-point win, with the midfielder among the best on ground to win 22 disposals and lay five tackles in a thoroughly influential display.

“They were tough and, in the end, we held on and I think our experience, and our endeavour to win – because we wanted to win and get that round one tick – got us through,” Parker told gwsgiants.com.au.

Canberra’s Britt Tully made a successful return to AFLW action, with the inside midfielder playing her first game for the GIANTS since 2018.

Tully wasn’t the only Canberra product to make a successful return to AFLW action, with Gold Coast midfielder Hannah Dunn returning to play her first game since debuting for the GIANTS in 2017.

Allen, formerly of Eastlake, was Adelaide’s second pick in the 2019 draft after taking out the 2019 SANFLW best and fairest award in her debut season.

In slippery conditions, Brisbane ran out comfortable winners 5.4 (34) to 3.3 (21) against the defending premiers at Hickey Park.

Broken Hill’s Tarnee Tester, a quick and smart Indigenous small forward, made her AFLW debut for West Coast after relocating to Western Australia in 2016. Tester’s Eagles were gallant in defeat against an experienced Collingwood outfit at Victoria Park.

In Round 2, the GIANTS will head south to face North Melbourne in Launceston next Saturday afternoon at 3:10pm. You can watch the game live and free on 7Mate in New South Wales and the ACT or stream live via womens.afl.