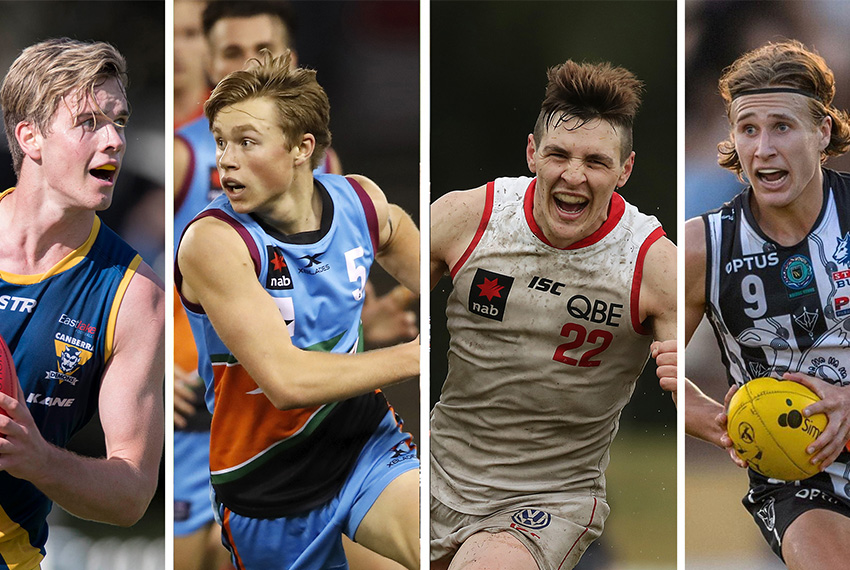 With the 2020 NAB AFL Draft fast approaching, we take a look at the top AFL NSW/ACT prospects vying for a spot on an AFL list for the 2021 season.

Campbell, who is tied to the Sydney Swans Academy, looms as a possible top-10 pick at this year’s NAB AFL Draft.

The 18-year-old is lightning quick, boasts a damaging left-foot kick, and provides great balance through midfield while also doubling as a flanker up either end.

Campbell’s undeniable talent was on show on the morning of last year’s AFL Grand Final, when he booted three goals from 14 disposals to be best afield in the NAB All Stars ‘Futures’ game.

Sydney, who will get first call on Campbell, face the possibility of having to match a top-10 bid from a rival club for the Pennant Hills junior.

Campbell’s partner-in-crime, Gulden is described as a hard working and smart midfielder capable of pushing forward and damaging the scoreboard.

Standing at 172cm, the diminutive speedster represented Australia’s under-17 side in an Anzac Day clash with New Zealand in April last year, and was the best and fairest player in Division Two of the NAB AFL Under-16 Championships in 2018.

Similar to Campbell, Sydney will get first call on Gulden as an Academy listed player.

Brother of GIANTS midfielder Tom, Josh shares a lot of physical traits with his brother but is more of a key position type who can play around the ground.

In 2019, Green played four games in the NAB League Academy Series, averaging 10 disposals and 3.3 marks predominantly playing in the forward half.

Green is arguably the GIANTS’ top draft prospect for 2020 and could find himself playing alongside his brother in 2021.

Byrne, a product of the Murray Bushrangers, is a classy half-back or outside midfielder who was part of the GIANTS’ Academy before his transition to the Bushrangers program, but featured for GWS as part of this year’s Academy Series.

In 2019, Byrne impressed throughout his 16 NAB League outings as an efficient forward runner from defence, who could also push up onto a wing or up forward.

The 18-year-old’s 2019 form was good enough to warrant a spot in the Allies squad, despite not cracking through for a berth in the Under 18 championships.

Byrne has his sights set on making half-back his own at all levels, while also striving to shift into midfield.

In 2017 Sam Fisher was delisted by the Sydney Swans without playing a game, but the now 22-year-old is determined to earn a second chance at the elite level.

The former GIANTS Academy product joined Swan Districts in the WAFL earlier this year on the back of his time with the Sydney Swans and more recently with the Northern Blues in the VFL.

Averaging 26.5 disposals this season, Fisher was named in the WAFL Team of the Year and became the first winner of the Sandover Medal from Swan Districts since Andrew Krakouer’s brilliant 2010 season that saw him subsequently drafted by Collingwood.

Fisher will aim to follow Marlion Pickett, Tim Kelly and Liam Ryan as a mature-aged players recently drafted out of the WAFL.

Highmore’s first SANFL season out of the NEAFL has seen him identified as one of the likeliest mature-age options from across Australia to find a home in the draft this year.

Having played 48 games in the NEAFL competition for Eastlake, Canberra and the GIANTS, Highmore signed with the South Adelaide Panthers earlier this year and wasted no time making an impression in his first SANFL season.

The 194cm defender starred for the Panthers early this season, leading the competition for marks before badly injuring his ankle in Round 7.