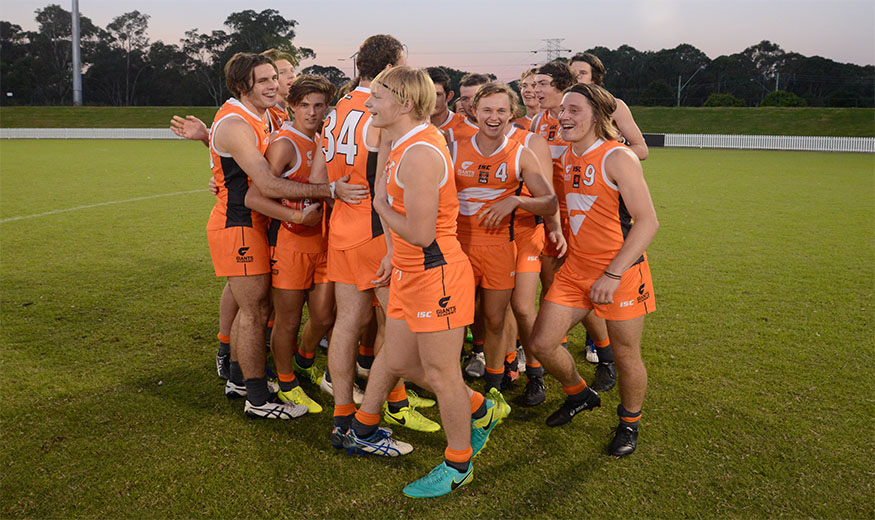 The NAB AFL U18 Academy Series wrapped up last weekend for the GWS GIANTS, securing a four-point victory over the Brisbane Lions.

The result capped off a positive series for the GIANTS, who will next year look to improve on their third place finish.

GWS GIANTS Academy coach, Jason Saddington was delighted with the improvements his side made throughout the competition.

“We were really pleased with the progression the players made in regards to their own individual development, and also their team style and performance,” Saddington said.

“Due to the regional nature of our program we get no time with the team as a whole to fine tune team performances.

“Round One was their first game as a group, and to see the progression over the five rounds was extremely pleasing.”

The GIANTS were unlucky to lose their first two games. A narrow four-point loss to the Sydney Swans in Round One was followed by a 17-point defeat to the Suns in Round 2.

They went on to win their remaining three games with Saddington pleased at the way the team bounced back.

“The Round Three game against Tasmania was the best example of our players growing as a group,” he said.

“Off a flat and poor performance in Round Two, we managed to get a serious and honest video review, which helped sharpen the focus, and channel in on some key areas to get some good match day connection.

“The players adapted quickly and got great reward with a tough win on the road in Hobart.”

There were a number of standouts for the GIANTS throughout the competition, with Nicholas Shipley particularly impressive.

‘[He] had a wonderful series and took out our MVP,” Saddington said.

“He is a Western Sydney lad who has continued to progress at a considerable rate.”

“[He is a] strong midfield type who has great power and endurance,” Denneman said.

“He hasn’t played the game for long so has real upside.

Saddington commented on a number of other players who stood out to him.

“Tom Highmore was brilliant across half back, Laine Fitzgerald continued to win possessions in the midfield, as did Jake Gaynor.”

Saddington believes the competition is not only a great chance to push for Allies selection, but also to gain experience before next year’s draft.

“The opportunity to provide high level experience to ten 17-year-olds is also invaluable to their ongoing development,” he said.

Denneman believes that the GWS GIANTS performed well, and the competition presented a great chance for their young footballers to be involved in a high-level competition.

“[It was] a strong showing considering some of the geographical challenges faced and the travel required,” he said.

“[The GWS GIANTS were] professionally presented and very competitive at all times.”

The GIANTS are confident of having a few selections in the Allies team set to compete in the Under 18 Championships in June and July.

“The Academy Series has been an incredibly competitive competition, showcasing the elite talents of players within these markets,” Saddington said.

“It’s always hard to predict which way the selectors are looking, but no doubt a number of our players have done their chances well.”

The Allies squad will be announced next week with their first game against Vic Country at Blacktown International Sportspark on Sunday, 11 June 2017.