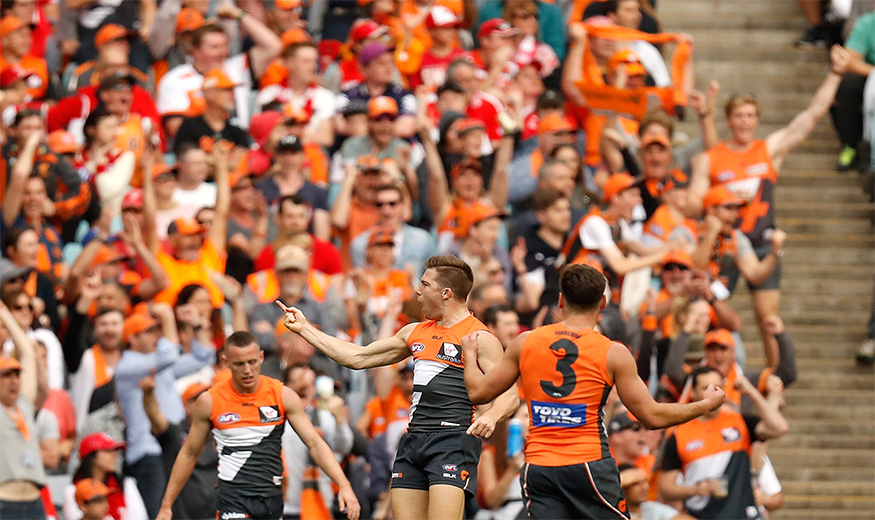 It is a cold winter’s afternoon at Sydney Olympic Park. Boys and girls are bouncing a Sherrin, practicing their hand passes and kicking goals.

One young boy bends a banana kick through the big sticks from 10 metres with virtually no angle to work with and nonchalantly walks back to high-five his friends.

Josh and Kai play for the Greystanes Goannas. They are here to meet and train with some of their heroes from the GWS Giants.

Josh says he likes AFL because it is unique.

“It’s Australia’s game and there are lots of skills like kicking and handpassing,” he said.

Kai loves the “fast pace and the running involved”.

This may be just a sports ground, but it represents the battleground where AFL is making giant strides to win over the hearts and minds of the football players and supporters of the future.

Winning the hearts and minds of Sydney kids

Ten years ago, the young boys and girls of Western Sydney had little reason to play or follow the game made famous in the suburbs of Melbourne.

AFL was an afterthought. Kids grew up kicking a round ball, shooting goals or following the exploits of the region’s four rugby league teams. There was precious little Australian Rules infrastructure and few clubs.

How the landscape has changed in that time.

A record 22,000 fans packed into the Sydney Showground on Saturday night to see the GWS Giants play the Swans in the 13th Sydney derby. Yes, most were Swans fans, but the Giants believe they are on course to become a superpower of Australian sport.

In its sixth year in the competition, GWS boasts more than 20,000 members. In context, that is more than the A-League club Western Sydney Wanderers and on par with the region’s best-supported NRL team, Parramatta. And the Giants are gearing up for massive growth in the years ahead.

The club has begun discussions about increasing the capacity of the Showground from 24,000 to 35,000.

“We’re talking about a competitive market of Western Sydney bringing in new generations of families and introducing them to the game and that’ll take a bit of time,” Giants chief executive Dave Matthews said.

“But I think you can see it’s going to accelerate rapidly over the next couple of years.”

Backed by an enormous broadcast revenue war chest, the AFL has poured hundreds of millions of dollars into developing the code at the grass roots.

The green shoots are starting to grow and with the inception of AFLW, it is women who are leading the way, according to AFL NSW/ACT chief executive Sam Graham.

“Now we’ve got a pathway. The girls playing at the grass roots can see that pathway to the elite level. That’s impacted this year,” Graham said.

“We’ve had a 77 per cent increase in the number of teams. So overnight we’ve almost got a doubling of women’s teams across the state.”

The AFL’s ambition is to give every student in Western Sydney the opportunity to play its game.

“We’ve been pushing pretty hard. Our game’s in the majority of schools now,” Graham said.

“We’re not there yet, but there’s lots of opportunities for schools to be involved in inter-school competitions.”

Publicly at least the AFL insists it is not at war with the rival codes but its strategy, aimed at winning over the region’s youngsters, poses a significant threat to the dominance of rugby league and soccer.

To date, no-one from Western Sydney has reached AFL level with the Giants. That could change next year with Campbelltown teenager Nick Shipley expected to be listed from the club’s academy.

More players will follow and the money from the AFL’s seemingly limitless coffers will continue to flow for a generational venture that is already starting to pay off.