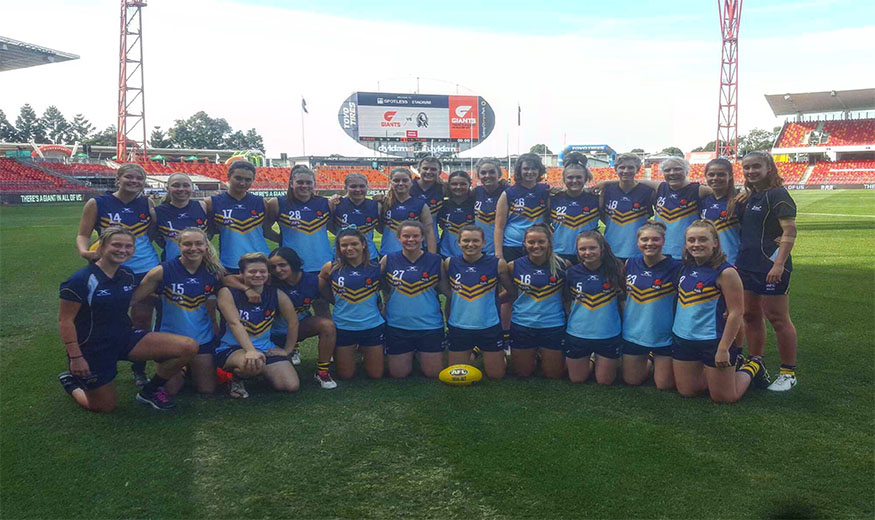 The AFL NSW/ACT team to take on Queensland in the first round of the NAB AFL Women’s U18 Championship has been announced.

The final team has been selected following a series of Academy matches in Coffs Harbour in April, and at Spotless Stadium over the weekend.

The NSW/ACT Youth Girls side played a Harvey Norman Invitational team as the curtain raiser to the GWS GIANTS vs. Collingwood match on Saturday.

The state team were dominant in their first hit-out as a playing group, bringing home the win by 102 points – putting their interstate opponents on notice.

AFL NSW/ACT Head Female Performance Coach, Tim Schmidt said he was pleased with his team’s performance heading into the Championships.

“It was an exceptional effort by the girls,” said Schmidt.

“This was the first time they had all played together. It was always going to be tough to learn how each other plays.

“However, the girls did a great job of focusing on our key outcomes. We’re all really looking forward to our first match of the National Championships next week.”

Schmidt also sited “classy” midfielder, Alyce Parker and “explosive” forward, Jordyn Jolliffe as some of the players to watch ahead of the Championships.

AFL NSW/ACT will play Queensland on Friday, 19 May 2017 at Blacktown International Sportspark, under lights at 6pm. For more information, head to the Facebook event page.