When the McVeighs came for a year and never left… 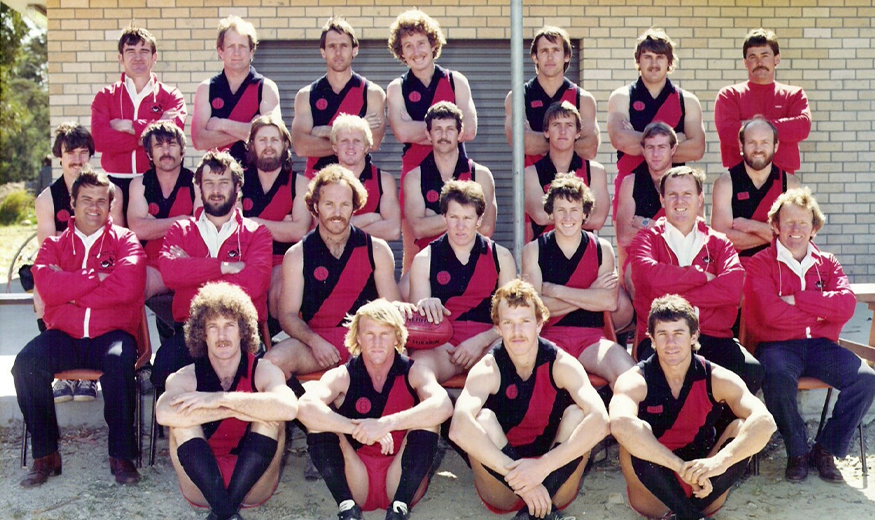 This story was originally published by the NSW Australian Football History Society. You can find it and plenty of other interesting articles at www.nswfootballhistory.com.au

When Tony McVeigh was appointed captain-coach of Killarney Vale for the 1982 season, he and his wife Margaret, with their 10-month-old son Mark, only planned to stay for a season. However, after leading the Bombers to the premiership they decided to stay.

That was 40 years ago and “Knackers” as he is known around the club will be front-and-centre for celebrations for the premiership reunion this Saturday (23 July) when the unbeaten Bombers take on second-placed and old rival Terrigal-Avoca in the Hunter Central Coast’s match of the round at the Adelaide St Oval, Killarney Vale.

The club had only been formed in 1978 and won its first premiership in 1981 in the Central Coast league under former South Sydney champion, the late Geoff Cann. The following year, the Bombers had all five teams in grand finals, winning the seniors, Under 15s, and Under 13s, while the reserves and under 17s were runners-up.

“It was a momentous year for the Bombers,” club founder and 1982 president Ian Granland told me. “We secured an outstanding senior coach with a wealth of experience after stints with Williamstown in the VFA, South Fremantle in the WAFL and a premiership with Surfers Paradise in the Gold Coast Football League. He was in his prime.”

“We also had all our teams in grand finals and this provided a pathway for juniors at the club which subsequently contributed significantly to our on-going success over the years,” he added.

In addition to McVeigh, the Bombers gained the services of former Leeton star player Rex Imrie who took on the role of assistant coach, policeman Steve Hunt (Liverpool), former Broken Hill rep Mark White, and the Warren brothers, Ray and Bob from Grong Grong Matong in the Riverina. Crucially, they retained the services of Geoff Cann, who topped the league goal-kicking with 128 goals for the season.

However, McVeigh was the key signing; he had been persuaded by his father-in-law who had a holiday house at The Entrance to try family life on the Central Coast for a year.

“It was the best move I ever made, we never left. I love the place,” Knackers told me from his home in Long Jetty, adjacent to the Shelly Beach Golf Club.

“We’ve had a great association with the [Killarney Vale] footy club, I played out my career [at the club], the boys [Mark and Jarrad] learnt their footy here, we’ve made life-long friends, and Mark [presently coaching the GWS Giants in the AFL] and his family are back living on the coast,” Tony said.

Mark was selected as pick 9 at the 1999 national draft by Essendon and played 232 games , kicking 107 goals in his career with the AFL Bombers from 1999-2012. After a brief career in the media with Channel 7 and SEN 1116. He then took up a coaching role with the GWS Giants in 2015 and took over as the senior caretaker coach following Leon Cameron’s resignation earlier this season.

His younger brother, Jarrad, was drafted at pick number 5 by the Sydney Swans in 2002. He subsequently played 325 games and scored 201 games for the Swans from 2004-2019 and was co-captain of the 2012 premiership winning team. He is currently an assistant coach at the Swans.

But it was their father who was the star on the football field in 1982 when he led Killarney Vale to a comfortable 33-point victory over the Gosford Tigers at the Mt Penang oval.

Marking four decades since the premiership

Tony told me the game was close early and the Bombers had to fight back from four goals down late in the second quarter. Despite that, they broke clear in the 2nd half.

Celebrations went all night and into the next day at the club’s small social rooms and bar at their home ground. “Looking back it was a fantastic year for the club and it established us as a force to be reckoned with in the local competition,” Tony McVeigh said.

Celebrations will resume when most of the 1982 premiership team gather in the Granland Rooms in the club’s social stand on Saturday to cheer on the Bombers in their quest to relive the glory of 1982 and move a step closer to winning this year’s premiership.