ADELAIDE, AUSTRALIA - JUNE 05: Mai Nguyen of NSW flies during the 2016 AFL Womens match between South Australia and NSW ACT at the Adelaide Oval on June 05, 2016 in Adelaide, Australia. (Photo by James Elsby/AFL Media)

MAI Nguyen is the perfect poster girl for the Giants’ push in western Sydney, and that’s just the way she likes it.

Nguyen grew up in Cabramatta, a suburb 30km south-west of Sydney’s CBD and smack bang in GWS territory. Her father came to Australia as a refugee from Vietnam in the 1980s, and still lives in the area.

The 26-year-old defender plays for the University of NSW-Eastern Suburbs Stingrays in the Sydney AFL competition. She admitted she “shed a tear” when the Giants selected her with pick No.49 at the AFL Women’s Draft in October.

She told AFL.com.au she’s more than happy to represent her area – and her culture – when the NAB AFL Women’s competition kicks off in February.

“I hope I can inspire young girls in western Sydney who might see us play at games or on TV to take up the sport that has given us such a great opportunity,” she said.

“It’s extra special for me to play for the Giants because I grew up in this area and I never thought this could happen. Now it’s happening in my backyard.

“There are a couple of western Sydney girls in the squad, (including) Amanda Farrugia, who lives down the road.

“Footy has given us so much, so now it’s our job to give it back to the community.”

Nguyen’s parents worked hard to give their daughter every chance of having a quality life in Australia, but while she classifies herself as a sports nut, her mother and father placed more importance on other things when she was growing up.

That meant her love of sport took a back seat to her education as a teenager, and it paid off, with the physiotherapist now working in Liverpool, another suburb in Sydney’s southwest.

The speedy back pocket hopes her parents will finally attend one of her matches when the season starts. This, she said, will help them understand the historic importance of the competition’s inaugural season.

“Sport isn’t part of the Vietnamese culture, so my family was very focused on (school and studying) when I was growing up,” Nguyen said.

“My parents aren’t even really aware of most of the sporting things I’ve done in my life.

“I used to sneak out and go to training. I think if they’d known, they would have preferred I was at home concentrating on studying,” she said.

“Despite footy being so important to me and a big part of my life, it’s not so much to them because they didn’t grow up with it in their culture.

“Once they worked out I’d studied hard and now have a successful career, they’ve become really supportive.”

You first chance to catch Mai and the GIANTS live in action is on February 18 at Blacktown International Sportspark against the Melbourne Demons. Entry is free. To view the full AFLW draw please click here. 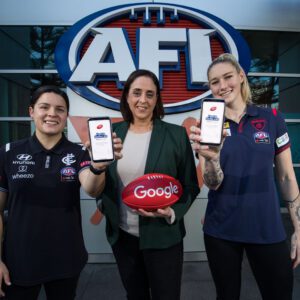