WA get away with win over Eastern Allies 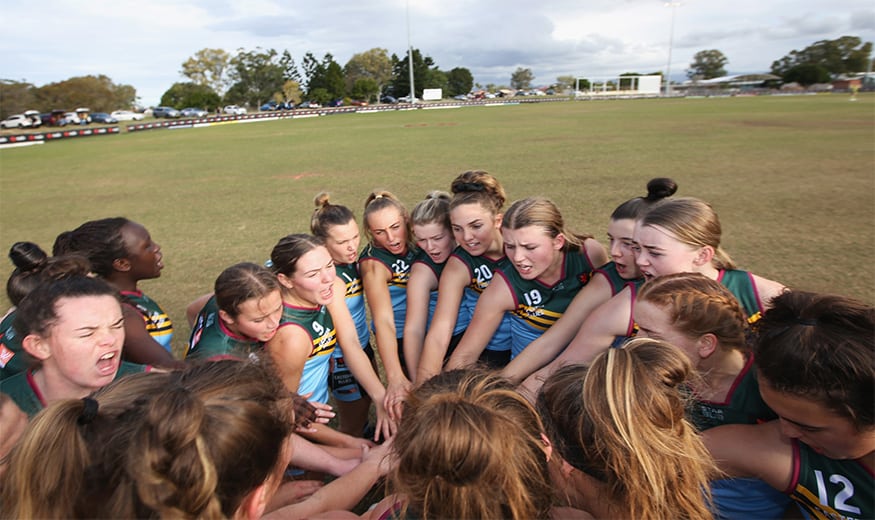 The Eastern Allies have come away disappointed after their second match of the 2018 NAB AFLW Under-18s Championships.

Taking on Western Australia at Broadbeach, the Eastern Allies went down by 30-points.

Our opponents came out quick. The Allies were outrun in the opening quarter, but managed to keep the Western Australians to just one goal. Their tackling was manic – it had to be – but they could not get the ball into their own attacking-50.

Alyce Parker was everywhere early and took some heavy hits. She chopped off three inside-50s kicks for Western Australia, keeping what could have been a larger quarter-time margin at bay.

Ending the game with 20 disposals, including 17 kicks, Parker’s trademark one-arm fend was also out in force across the game.

Western Australia had plenty of chances to be further ahead, having missed several shots on goal, but still had a seven-point lead at the first break.

The Sandgropers came out hot early in the second, forcing Easts to defend time and time over. Their attacking pressure had lifted, and all it took was a sneaky toe-poke off the ground by Western Australia’s Kate Bartlett to break the camel’s back.

Implored by their Coach, Alicia Eva to keep heads high, a new Eastern Allies team came out ignited in the third.

Tasmania’s Chloe Haines hit the scoreboard for the Allies first, followed soon after by Albury’s Brea Quinlivan. The bench was pumped, and the Eastern Allies were back in the game, down by just two-goals at three-quarter time.

The final term was tough. A free kick – paid down field – would gift Western Australia the first goal of the fourth quarter, and from there, the game would be lost. Any question that the Allies asked inside their forward-50, the Western Australians had an answer.

Sydney’s Jemima Wrigley was big in the last quarter, as she had been all day. Never did she give up, pestering the opposition with her speed and scrap.

In the end, Western Australia would kick three for the term, frustratingly allowing the score line to blow wider than it should have been.

Coach Eva was disappointed by the loss but buoyed by the teams’ effort.

“There are mixed feelings post-game because when we played our best footy, we looked really dangerous and we are capable of playing that footy for longer periods,” said Eva.

“But for a team that has come together in the space of four days, it was really fantastic to see the girls play to instruction, and play a physical game against a talented side.

“I’m really proud of the resilience of the group to respond after a goalless first-half. We let a few easy goals in towards the end, which didn’t reflect how tight of a contest it really was.

“I was really pleased with Georgia Garnett. She has just shown she has another string to her bow. She has played really consistent footy for us across half-back and then did a job for us when we put her in the middle. As a bottom-age player, I was really impressed.

“I was also really impressed with Hamilton’s composure. She has shown that she not only works hard defensively, but can find the footy and execute going forward.

“The game against Queensland will be a good opportunity to build on the areas we need to improve on – we’re really looking forward to it already.”