Eleven umpires from the AFL NSW/ACT region have been selected for the upcoming 2019 NAB AFL Women’s season.

Liam Cashion, Ben Fely, Harrison Hansford and David Wood will run the boundary throughout the nine week competition, while Nic Ford and Taylor Mattioli – one of last year’s AFL Women’s Grand Final Goal Umpires – will officiate the two scoring ends of the field.

The region will also be represented on the AFL Women’s Rookie Umpires list with David Newell and Victor Petrovic gaining the call up.

In total, 65 umpires from across the country will form the primary umpiring list for the competition.

In a positive move for AFL Women’s, the competition has also been elevated on the National Umpiring Talent Pathway.

“As the AFLW competition grows year on year, as to do the requirements of those appointed to officiate in the competition,” said Anderson.

“The AFLW competition has now been elevated in the Umpiring Talent Pathway to sit immediately prior to the AFL men’s competition – as would be expected as both are elite level competitions.

“All umpires selected are high performing state league umpires, with many knocking on the door of the AFL Men’s competition.

“We are again excited and proud to have proportionate representation with the traditional football states, including having a New South Wales based female field umpire selected.

“We also have an commensurate representation of umpires from both Sydney and Canberra, indicating our talent programs are functioning well.

“The pathway is very clear and very achievable for all aspiring umpires within New South Wales and the ACT, regardless of the umpire’s geography or gender.”

If you would like further information on how you could get involved with AFL Umpiring, head to the Umpire.AFL website. 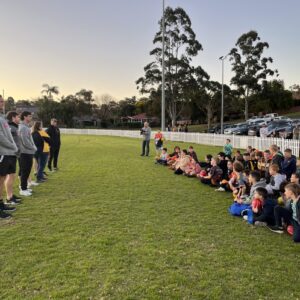