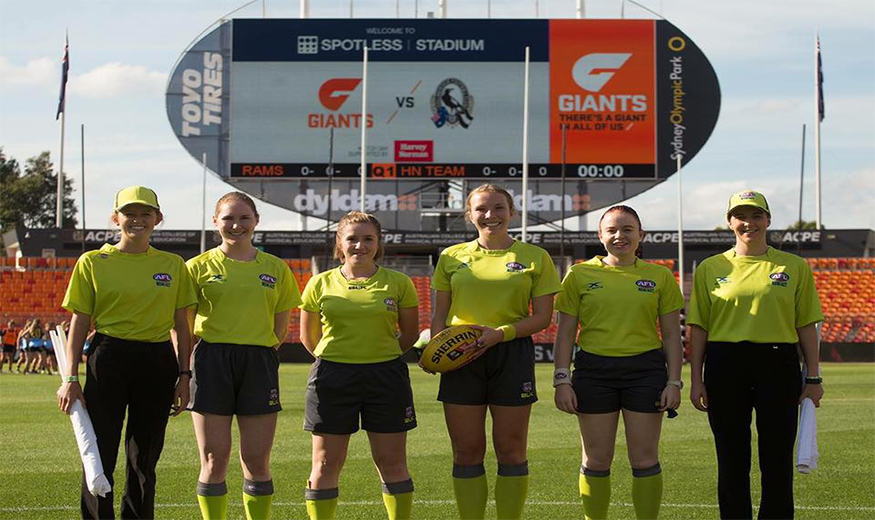 Shauna Flynn (second from the left) officiates at Spotless Stadium.

South Coast Boundary Umpire Shauna Flynn has been announced as a finalist for the 2017 NSW Community Sports Awards in the Young Official Category, as awarded by Sport NSW.

With over 500,000 people across New South Wales voluntarily dedicating their time to sporting clubs and organisations, the NSW Community Sports Awards provide a platform where individual contributions to community sport can be recognised.

Flynn described being nominated for Young Official of the Year as a big surprise.

“I never expected anything like this, I feel privileged to have been nominated,” said Flynn.

At only 16-years-of-age, Flynn made history when she was selected as the first South Coast Umpire to officiate an AFL game at the elite level.

The teenager debuted as a boundary umpire in the GWS GIANTS clash against Fremantle in the 2017 AFL Women’s competition – just 12 months after officiating a local AFL game.

Progressing quickly from umpiring community football to officiating AFL Women’s, has shown Flynn’s immense drive and passion for the game. Flynn says she cannot wait to see where umpiring will take her in the future.

“I would love to be on the boundary panel for AFLW in a future season, but ultimately I umpire because I love it and because I enjoy seeing my own development and improvement,” Flynn said.

Flynn says some of her most memorable highlights of boundary umpiring have been meeting new people, including umpires and coaches who have helped with her personal growth.

“Being given opportunities such as umpiring the South Coast Seniors Grand Final last year, umpiring an AFLW game this year, and being on the NEAFL Development Squad have all contributed to my enjoyment of umpiring as well.” she said.

Flynn also strives to give back to her South Coast community through being a member of the Boundary Umpire Leadership Team. Each week, she volunteers her time to mentor first year boundary umpires where she shares her own knowledge with the group.

“Being a mentor, I am able to help new junior umpires learn the skills and inspire them to set and achieve their goals.

“I enjoy sharing the knowledge and skills I have attained from the exposure I have had to elite umpires and coaches at training this year.”

Flynn also says that being the second eldest in the boundary group, she is a role model for the younger umpires who often seek her help and advice.

Flynn has played an integral role in recruiting new female umpires and ensuring an inclusive and supportive environment is provided. Outstandingly, her commitments have seen a 50 per cent increase in female umpiring numbers over the past two years in the region.

If you know of a wonderful volunteer at in your local Club or League, why not nominate them in the 2017 AFL NSW/ACT Volunteer of the Year Recognition Program.