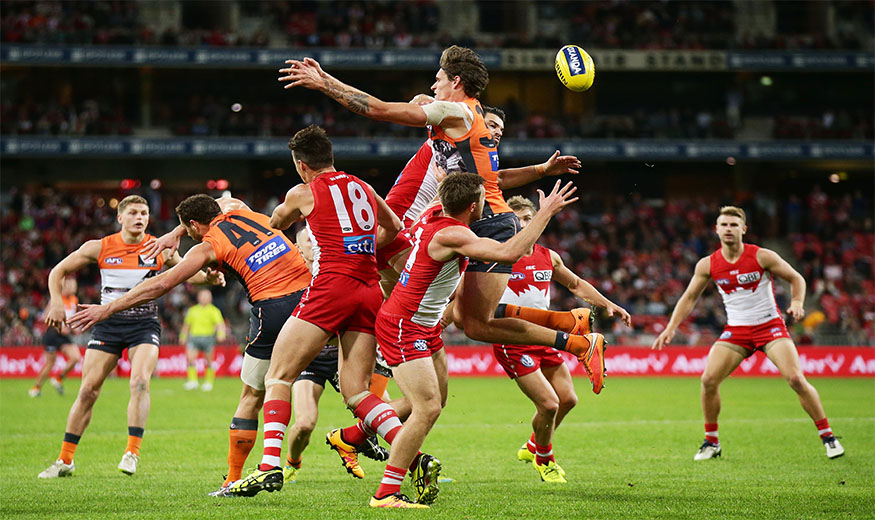 The 13th edition of the Sydney derby has enormous finals implications for both sides, with the Giants clinging to spot in the top two, and the Swans finally sitting inside the eight for the first time this season.

Sydney is the form side of the competition having won eight of its past nine games, while the Giants have taken full points just once in their past four, against the Brisbane Lions, and enters the match coming off consecutive draws against Geelong and Hawthorn.

In-form Swans defenders Dane Rampe and Heath Grundy will have a huge task trying to stop Jeremy Cameron and Jonathon Patton, with help from youngster Lewis Melican, while Giants co-captain Phil Davis will renew acquaintances with Lance Franklin, who has lost his radar, kicking 11.19 in his past five matches.

Spotless Stadium is set to sell out for this monster cross-town encounter.

WHERE AND WHEN: Spotless Stadium, Saturday, July 15, 7.25pm AEST

1. In round five at the SCG the Swans kicked the first four goals of the game before the Giants booted 15 goals to five for the remainder of the match. Shane Mumford dominated in the ruck with a career high 62 hit-outs.

2. So far in 2017 the Giants have won the disposal count 11 times and the clearances in 10 games; they are the number one ranked clearance team averaging 41.8.

3. GWS and Sydney will meet for the 13th time and while the Swans hold the advantage, winning eight games to four, the Giants have won the past three contests.

4. This is the fourth Spotless Stadium clash between the sides with GWS winning two games to one. The Giants are four wins and one draw from five games at the venue in 2017.

5. The Swans continue to be the form team, since round seven they are 8-1, two games better than any other side, but the Giants aren’t far behind, they’re 5-3 plus two draws.

The key defender will run out for his 50th senior appearance, and will be an important player in helping his co-captain Phil Davis shut down Sydney ace Lance Franklin.