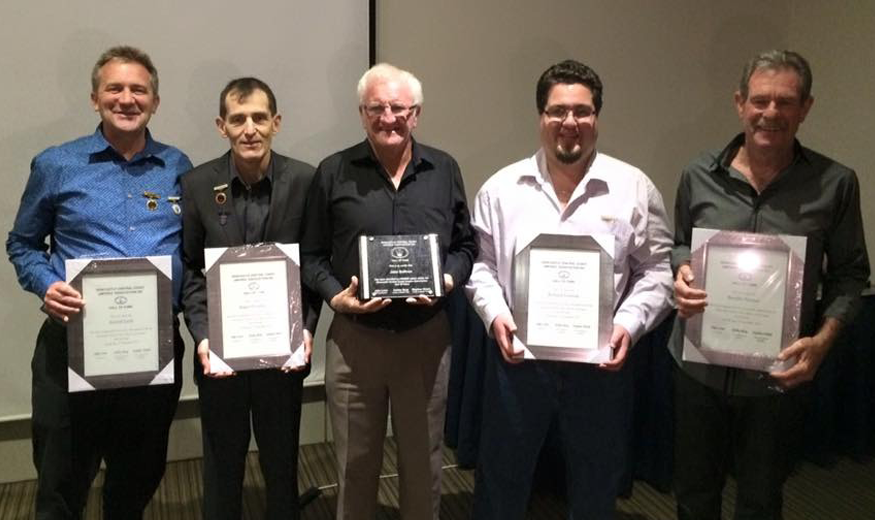 John Sullivan (centre) being inducted into the NCCUA Hall of Fame in 2015.

THIS weekend, John Sullivan will umpire his 1000th AFL match in the Hunter & Central Coast region.

The man affectionately known as “Sully” shows no signs of slowing down. The 71-year-old will be between the sticks for the game between Warners Bay and Cardiff Hawks this Saturday afternoon.

Sullivan took charge of his first match as a field umpire in July 1966, between the National Service and the Royal Australian Air Force. Since then he has umpired 530 Newcastle AFL (NAFL) matches, 409 Black Diamond AFL matches, and 59 AFL Hunter Junior matches.

“Although in hindsight it is only a number. A friend of mine in South Australia has umpired over 1600 games!”

Sully has received many accolades for his umpiring. In 2012 and 2013, he won the Newcastle and Central Coast Umpires Association (NCCUA) Goal Umpire of the Year award. The award has since been named in his honour, highlighting the esteem in which he is held in by his peers.

Sullivan was the first person to be inducted into the inaugural NCCUA Hall of Fame in 2015 and is currently the only member recognised with ‘Legend’ status.

“[He] has given so much to not only umpiring but also AFL in the region”.

“We wish him all the best for Saturday,” Lowe said.

“All of us in the NCCUA are incredibly proud of what this inspirational man has and continues to achieve in umpiring,”

After extending his career by becoming a goal umpire, Sully has now turned his attention to helping the next generation. With his 1000 games of experience, Sullivan wants to work with younger umpires to help them reach their potential.

“I’m pleased that I can still get out there now,” Sullivan says.

“Specifically now with the younger group to be a mentor for them.”

You can see Sully in action on Saturday at Feighan Oval, Warners Bay.

If you or someone you know is interested in becoming an umpire, please visit Get In The Game.