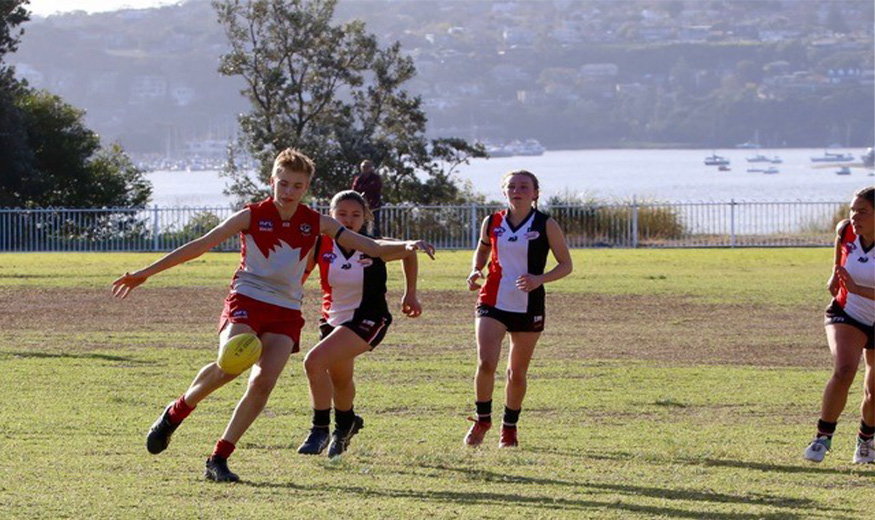 Ahead of the first ever NAB AFL Women’s Draft Combine taking place next week at Etihad Stadium in Melbourne, we are chatting with AFL NSW/ACT’s four representatives.

Today, we are getting to know Nicky Steel – a tough fullback who plays for the Mosman Swans on Sydney’s North Shore.

I just finished my last season at the Mosman Swans. I normally play in defence as full-back or centre half-back. I like full-back because you get to go one-on-one with your opponent, but centre half-back is my favourite as I get to move up the ground and read the play.

Tell us about where you grew up.

I was born in Sydney but we moved to Melbourne when I was three. We lived there for eight years and although I don’t remember everything clearly, some of my favourite memories of Melbourne are the footy culture and the Yarra River, which we used to ride our bikes along, and the food.

Did you grow up with AFL as a big part of your life?

Yes. I remember getting the train to Jolimont Station on Saturday afternoons – sausage rolls packed and Collingwood scarves on – and watching the Pies play on the MCG. Then the train ride home when they had won, with the carriage packed full of Collingwood supporters still singing the song.

Which AFL/AFLW team do you support?

AFL is definitely Collingwood and AFLW is probably the Giants.

Who is your favourite AFL/AFLW player and why?

Nick Maxwell (when he did play AFL) – mainly because he was a really courageous defender and such a good leader.

What did it mean to you to see the AFLW come to life this year?

It meant so much – that there was finally some female footballers like me that I can aspire to; an end goal. Before now I had never even considered playing footy professionally, as it just wasn’t possible – now I can try to achieve the dream of getting paid to do something that I love.

What was your favourite moment of the first AFLW season?

The first game, seeing the huge crowd of people on TV and hearing the news that there was a lockout. It was just amazing because it meant so much for female football – that so many people wanted to be there and wanted to watch it.

Do you have any pre-game superstitions?

None that I know of – I did wear the same pair of footy boots for about five years (my favourite boots and first ever pair) before realising part of the reason why I fell over all the time in footy games was because the studs were completely worn down.

What are your personal goals for any potential AFLW career?

If I were to get Drafted and play AFLW, my goal would be to play my best football consistently.

I’m expecting it to be tough but exciting, and I’ll probably be amazed by the skills of the other girls there. The main challenges for me will be the beep test and time trials. I’m not unfit, but running makes me nervous because it requires so much mental toughness to keep going when you’re physically exhausted. Sprints and agility will also be pretty difficult.

How are you preparing for the AFL Women’s Draft Combine?

I’ve been trying to improve my fitness by doing hill sprints. I live on a pretty steep hill, so it’s a good challenge. I’ve also been working on my ball skills.

Tell us something fun about yourself which has nothing to do with football.

I have 12 pets – one dog, three cats, three chickens and five rabbits. I love having so many animals even though the feeding routine can take a bit of time.

If not for AFLW, what are you most likely to become famous for?

Apart from sport, I love science, so maybe for inventing or discovering something cool.

What is the most impressive thing you know how to do?

What was the last adventure you went on?

Exchange to Germany in 2015 – that was definitely an adventure, travelling alone to a country on the other side of the world and living with another family for three months.

What are you most terrified of?

Who is your ultimate role model and why?

My ultimate role models are my parents. They’ve both worked really hard all their lives to provide a good life for me and my sisters, which I really admire. It inspires me to work for things I want in life too.

Nicky Steel will join 46 other players from across Australia at the 2017 NAB AFL Women’s Draft Combine on 3-4 October at Melbourne’s Etihad Stadium. You can keep track of all AFL NSW/ACT related results from the NAB AFL Women’s Combine on our website, Facebook, Instagram and Twitter pages.