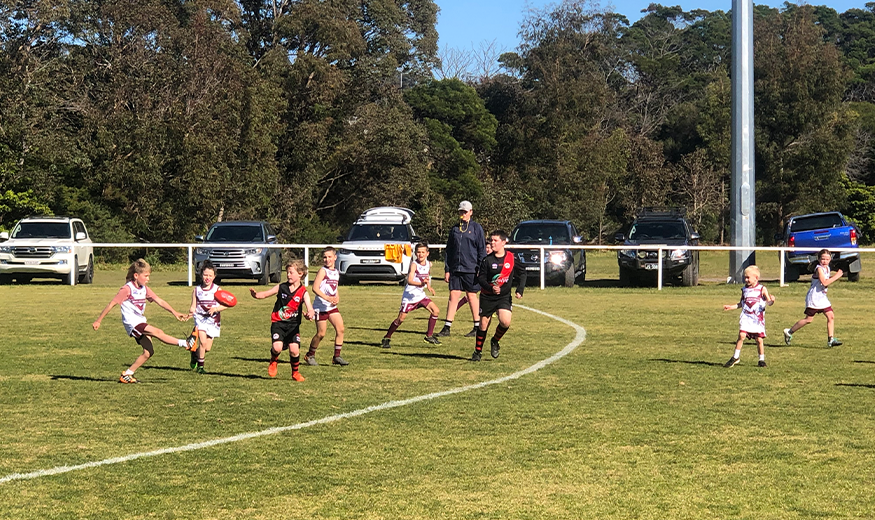 On Saturday, 14 August around 100 NAB AFL Auskick and U9 footballers descended on Berrambool Oval, Merimbula for a gala day on the Sapphire Coast.

Little did they know this would be their last time playing with their mates for a while. The NSW Government announced regional NSW’s stay-at-home orders from 5pm that day while the players were on the field.

Looking for a challenge

This meant that players fresh out of Auskick would have to play against people two or three years older than them – a daunting prospect.

Despite support from across the community, an U9s competition couldn’t get going this season, with time and resources spent ensuring the debuting Youth Girls competition would be fun and sustainable for everyone playing in that category.

It left younger players without a dedicated age group for them, with some making the jump to U11s and the others remaining in Auskick longer than they needed.

“I was a big believer that we had to have an age category for the boys that were eight and nine,” said Cymmon Parker, President of the Tathra Sea Eagles. “They just need something more than Auskick where they can be competitive.”

The idea for an U9s and Auskick gala day arose from clubs wanting to get footies in the hands of the younger players in a fun and age-appropriate setting. “There were some kids who weren’t confident enough to play U11s and just wanted to have a bit more of a run with kids their own age,” Parker said.

To include people of different levels of competitive football experience, there were two fixtures on the day. One with Auskick players, the other with U9s who had previously played.

It was a great success, with players and families from Bega, Tathra, Merimbula, Pambula and Eden coming to Merimbula to join in the fun.

Plenty of participants were taking to the footy field for the first time, coming from other codes to try something different.

Parker’s primary motivation behind organising the day was to get younger ages hungry for more competitive football. “I just really hope that it’s gained interest for those younger kids, because they’re the future of our clubs.”

This was the first Auskick/U9 gala day of its kind on the Sapphire Coast and a great solution to give kids of all abilities a positive footy experience.

There are still a few more spots mapped out on our Digital Road Trip! Stay tuned